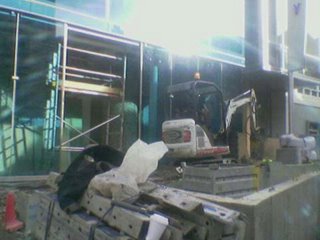 It’s Sunday evening, and I’m in my office at Broadway, just finishing off the draft of ‘Mum and Dad’ ready to send off tomorrow. It’s the first time I’ve been in the building for months when I haven’t had to make my way through a corridor of scaffolding, dangling wires and builders to get to the office, or try and work against a backdrop of drilling, banging and impromptu tests of the new PA system.

They’ve been redeveloping Broadway, putting in a couple of new screens and some new offices and I’m sure it’s all going to look great. But it has been pretty difficult to concentrate for a lot of the time. Not that I’ve had the opportunity to let that bother me – since I got back off holiday I’ve been working like a demon to get this script done – averaging something stupid like 9 pages of script a day. Today was the first time I actually got the chance to read the whole thing through (although Lisa, my producer for this project has been great at reading the drafts-so-far). I think it’s turned out okay – yeah, in places it reads like it needs work, but I think the structure and the basic characters are there. I also don’t know how much of a chance we would have to develop the script if we were commissioned – it sounds as though Film London really want to get a move on with these projects and get them shot in the next few months.

It’s a weird thing, having to put so much thought and effort into visualizing the finished film – it’s what always happens, funders want you to make the film as much as possible on paper before they’ll let you actually make it – because at the back of your mind you’re always acutely aware that the more you invest in it – in terms of time and effort and slices of your soul – the bigger a disappointment you are priming yourself for. And yet, to hold back from putting in that amount of effort would only damage your chances more. It’s like running at a door that has a one-in-three chance of being made of paper, with a soft mattress behind it, and a two-in-three chance of having a large boxing glove on a spring at crotch height. The faster you run, the better or worse it’ll be.

Enough daft metaphors – that’s what spending too much time in your head does to you. At least I’ve got another feature script, however rough, which is something I didn’t have a month ago. Think positive.
Posted by Steven Sheil at Sunday, October 01, 2006