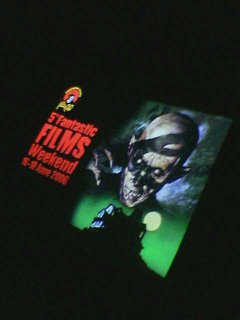 Made the trip to Bradford the other weekend, along with Chris, Gareth and John Ross, for the last day of the 5th Festival of Fantastic Films at the National Museum for Film, Photography and Television. ‘Through A Vulture Eye’ was playing in the short film screening, but we also wanted to go up to check out some of the rest of the programme. We got there early, with an hour to spare before the first film, and so ended up going in to see the Ray Harryhausen exhibtion which happens to be running at the same time of the festival. 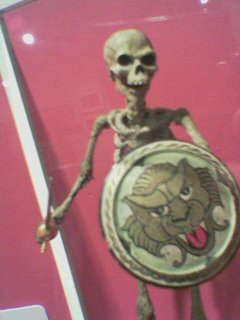 It was great – sketches, storyboards and original models from films such as Jason and the Argonauts, Sinbad and the Eye of The Tiger, Valley of the Gwangi and Clash of the Titans. These are the kinds of films I grew up on – watching them on TV and at the cinema over and over and even now, seeing them brings back a prickle of excitement. 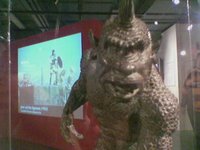 The first screening we went to see was Robert Fuest’s ‘The Final Programme’, an adaptation of a Michael Moorcock novel from the early Seventies. Fuest introduced the screening and was great – he described the whole mad story of how the film was funded and developed – involving him basically acting out the whole story, gunfights and all, in front of a group of potential moneymen. When he was told that he wouldn’t be able to make it for the money available, he went away, talked to a few people, made some deals and came back proving that he could – even if it meant him designing most of the film himself.

The film, screened in a wierdly faded archive print which gave everything a pinkish tinge, was nonetheless fantastically enjoyable. Deliberately loose, playful and loopy, the film bounces from one improbable scene to another, carried along by the urbane and irascible Jon Finch as Nobel Prize winning dandy Jerry Cornelius. It’s full of hilarious moments and has a real sense of the inherent daftness of science-fiction, which it constantly exploits. My favourite moment was a great fight scene between Cornelius and a character called Dmitri (“Shit, the Greek!” is the opening line) which was both outrageous and strangely realistic (Cornelius at one point yells out “Help me, I’m losing!” in a defiantly unheroic manner.) It was a really good start to the day.

After a quick cup of coffee, it was on to the shorts. Tony Earnshaw, the festival director had suggested that I could do an intro to the film if I wanted, so I did, then gave a little background to the film afterwards. A couple of the other filmmakers also introduced their films which served to give some context to what we were seeing. The shorts, as they usually are, were a mixed bag, but it was good to get to see some other UK and foreign shorts – me, Chris and Gareth are already on the hunt for things we can bring to the next Mayhem. 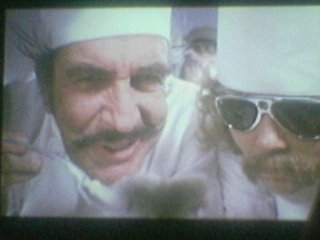 With only a quick break, we were back in for a new print of ‘Theatre of Blood’, which John hadn’t ever seen. ‘ToB’ was one of the first horror films I really remember – I think back when I was a kid they used to show horrors late at night on Saturdays and there are certain scenes from the film that really stay with me – Michael Hordern’s death, stabbed repeatedly by a group of tramps in a warehouse, his blood smearing the polythene; Robert Morley as a camp theatre critic being forcefed his own poodles – as well as bits that I couldn’t remember – Vincent Price in a giant afro as a camp hairdresser seems to have been entirely wiped from my memory. It’s a great, funny, horrific, mad and effective horror film, one that really goes for it in a way that not many films do nowadays. 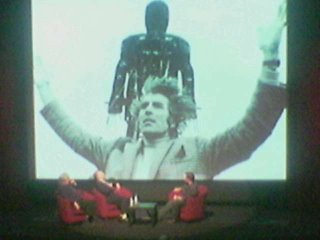 The final event we saw was Robin Hardy’s introduction to The Wicker Man, which was quite entertaining, but went on quite long (hour and a half) – and because we hadn’t really eaten since breakfast, we ended up leaving early, not watching the film (which we’ve all seen enough times anyway) and going for a really nice curry over the road.

It was an enjoyable day – good to see some British stuff with that inherent edge of madness which I like – and it made us wish we could have seen more of the festival. It also gave us some ideas for what we might try and do with Mayhem – the talks by the filmmakers were really interesting and it would be great to try and do something like that here. 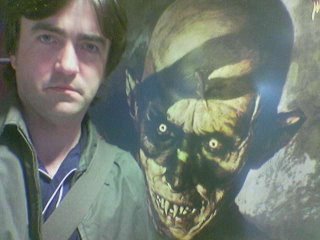