I spent most of last week working on a new project – an outline and treatment for another horror feature. I had to put it together really quickly to meet a application deadline for a scheme which I’d been invited to apply for, so I worked up an idea that’s been hanging around the back of my head for a couple of years, an ultra low-budget full-on horror called ‘Mum and Dad’. Although it was a lot of work, it was actually quite good to do it in such a short space of time – it feels like after moving in slow motion, the idea suddenly got injected with an accelerated growth hormone. The good thing is that, whatever happens, I’ve got a new outline to be thinking about – and it’s something that I really would like to do, because there’s a lot of stuff in it that, although very wrong, I could have a lot of fun with. The only negative about working in such a way is that there is no time for new things to rattle about inside your head and bang into other things – you have to kind of force things together and sometimes it means that there are elements that aren’t as rich as you might have wanted them to be. Of course, if the project goes anywhere (in terms of the scheme), I can work on these, but when you’re putting something in for consideration by a panel, you have to realise that as far as they are concerned, this is it – what you’ve put in could well be the end of a lengthy, considered, exhaustive process of imaginative thinking, rather than the beginning.
What’s quite interesting is that because I’ve had to knock it up so quickly, I’ve ended up talking to people about it, trying to get an idea of what they think – in effect doing a load of casual mini-pitches. And in that respect it seems like it works. It’s got a similar feel to Cry, where it seems quite straightforward to talk about – people seem to get it pretty quickly – whereas a lot of my other ideas take a bit more explaining – like I haven’t really got them boiled down enough in my own mind. It’s good practice, talking about things you’ve got in progress – it makes them seem alive in a way. For me, it feels good to get away from that feeling of preciousness about ideas – that fear that if you talk about them while they’re still in that embryonic stage you might ruin them, or someone might leech the idea, or people will look at you like you’re some kind of freak with a sewer for a brain…. 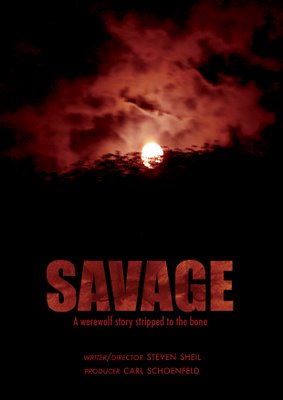 ‘Savage’, the other horror feature that I’ve been working on for a while has always been a bit of a harder pitch, and I think that’s down to me not having it crystal clear in my own mind where the key to the story lies. It’s something I’m working on at the moment, as I’m attempting to put together a revised outline for the story. I might have to do a new treatment as well – I did a PDF earlier in the year which works in some respects, but in others turns out to be a bit offputting, apparently. Luckily, having been in perpetual development with projects like ‘World of Pain’ for a number of years, my feelings towards revisiting/revising/reinventing ideas have softened. Now it feels like an opportunity to get something else out of the elements you’ve assembled. Not that you have to completely change the story, just find a different way of telling it. It always feels like a failure of communication on my part if people read the outline/treatment and can’t get how the film will work.

As far as ‘World of Pain’ goes – Chris is currently doing his draft of the script, so I imagine at some point in the near(ish) future, I may get the chance to revisit it. And turn it into a film about darts. Or caber-tossing. Or cheese-rolling. Or something.

‘Deliver Me’ is on the cards to start pre-production in the Autumn. We had a meeting with Paul Welsh from Em-media the other day, who has managed to get the paperwork sorted out. It was good to get some feedback on him about the project, as it’s the first time that we’ve really had that to date. He has some issues with the story, which I can understand, and I think we’re going to sit down and go through it prior to starting work, although I feel like at this stage we’re still sounding each other out and slightly miscommunicating because we don’t know each other (or each other’s work) that well. (Example - in this meeting we had a five-minute argument about whether ‘a vision’ was the same as ‘seeing something’.) He seems behind the film, but he did start off by warning that it was a ‘critical’ film for me. He was talking about how the routes into features are getting more and more streamlined, and how films around this level – including DVShorts and Cinema Extreme (ostensibly the rung above and below) are seen by a lot of people who will be in the position of looking for people to develop into feature directors. It sounded a bit depressing – kind of like a make or break deal – but then it probably is the reality of going along that route. However, for my own sanity, I can’t think of that being the only way that you get to have a career as a filmmaker in this country, so my attitude at the moment is to do my best to make the best film possible for the scheme, but not to treat it as though it’s such a precious chance that if I fuck it up I’m doomed. That way lies madness.

So, I’m going to continue making films outside of the funding system, just to assure myself that I can – and because, essentially, no-one can stop you doing it. Up with uncinema.
Posted by Steven Sheil at Tuesday, July 04, 2006