I’ve just realized how close we are to the date when I’m supposed to be shooting “Awake” – (I’m actually thinking of changing the title to “Life in the Woods” as it’s the subtitle of Thoreau’s “Walden”, or maybe even calling it “Awake, or Life in the Woods” – I really like the idea of having a long, unwieldy title for some reason…). I’m not really that prepared – the script isn’t really written yet, I haven’t got a shot list, I don’t know what equipment we’re going to need – but I have been working on creating the spidery tree demon which bothers the main character – in fact, I’ve probably spent far more time than is healthy glueing bits of felt to the taxidermy body I bought off Ebay – the thing is likely only to be on-screen for a very short space of time. 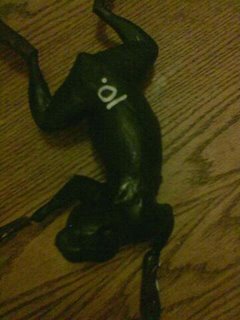 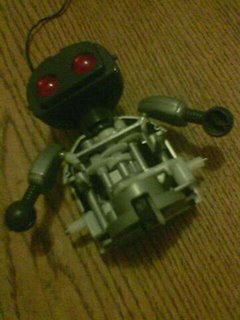 The thing is, I’m trying to follow my own advice – and to show, rather than imply –embracing the daft (or at least, the potential for daftness). I’ve been encouraged (some would say “baited”), in this by Gareth, he keeps reminding me of my “fear of the daft” ethos, and wants me not only to show the demon, but to have it move about. This wasn’t part of the original plan, but I can’t resist a challenge, so I’ve started to make an additional model, based around a toy robot I found in a cupboard at home.

Hopefully, this will straddle that line of being creepy and stupid – rather than just being laughable (however, as Gareth has pointed out, if I’m feeling nervous about it, I need only remind myself that it can’t look any worse than the thing that runs off the table after it has burst out of John Hurt’s stomach in "Alien”). Gareth is still keen for me to have a scene where the demon is attacking the character, and he has to thrash around holding on to it to animate it, because it reminds him of the final part of “Trilogy of Terror” but, apart from the fact that I’m not entirely sure if the model would stand that kind treatment, I don’t know if I can fully embrace the daft to that extent…
Posted by Steven Sheil at Friday, July 21, 2006

saw toby today and he said that when he was being attacked by the alsation in the sea in wilderness, it was a glove puppet operated/acted by him... ha ha ha... it can work!

what about calling it awaken? or awakened? or awakening? or the awkened? or awkenining? no that's no good is it... awaker? thats bad... you know what - what about AWAKE!?