All kinds of wrong

For a couple of years now, a few of us have been getting together on a regular basis to have Horror Nights – essentially horror film all-nighters round somebody’s house ( I say all-nighters, but usually we’re lucky to get past about 4 in the morning – although this means that we get through at least 3 or 4 films). As the nights have gone on, the choice in viewing material (mostly provided by me and Cooke) has got more and more varied and esoteric, which has led to great discoveries (like The Blood Drinkers, Daughter of Horror and May) as well as the occasional stinker.

This weekend, we had the first Horror Night for a while, round at Gareth’s. After a bit of a preamble with the a couple of Fleischer Superman animations from the 40s (which I picked up the other day for 99p from one of those discount book stores in town) – which were great, we started off with ‘Imprint’, Takashi Miike’s entry into the HBO ‘Master of Horror’ TV series, which showed on Bravo earlier this year – and which was the only one in the series (including films by John Carpenter, Toby Hooper, Joe Dante, Dario Argento, Lucky McKee, Don Coscarelli and Stuart Gordon), which hadn’t actually been shown in America due to its extreme content. Cooke and me had both seen it when it had been on TV, and wanted to see what the others would make of it. It’s probably the most compact of his films that I’ve seen (along with maybe ‘Audition’), with a really good narrative structure, but also at least 4 or 5 different kinds of wrongness.

It starts with an American (played by Billy Drago, who, despite being the only American actor amongst a Japanese cast, manages to deliver all of his lines as though they were written in a language he’d never before encountered) travelling out to a brothel island in 19th Century Japan to look for a girl he left years before. In the first five minutes you have a the bloated pregnant drowned corpse of a prostitute, a dwarf with a cockerel headdress and a big dark syphilitic hole in the side of her nose and a young prostitute with a face that is twisted on one side into a Joker-style smile.

From then on, you get ghostly apparitions, the most horrible and wince-inducing torture scene that I’ve sat through since ‘Audition’ - (as a punishment for a presumed theft, the black-toothed brothel madam decides to maim one of her girls, but only in ways that won’t damage the merchandise…), the most extreme story of childhood poverty (including incest, aborted foetuses and rhubarb) and an ending that comes totally out of left field, that will have you both laughing and shaking your head with the horrible daftness of it all. All in all, it managed to put John off his pizza, allowed Gareth to discover what particular piece of onscreen brutality really makes him squirm, and set up some of the themes of the night, namely: wrongness, twinfreakery and, weirdly, noses.

After that, we all fancied something a bit lighter, so Cooke suggested Paul Morrissey’s Flesh for Frankenstein. I’d never seen it before (nor Blood For Dracula, which it was made back to back with) and it was a good contrast with ‘Imprint.’ It’s loopy, excessive, camp and hilarious – and, what’s more, it was originally made in 3-d, a fact which really adds to some of the scenes, especially when it’s a giant pair of decapitating tongs heading straight for you, or some innards falling out down a drain and into the lens, or with Udo Kier’s impalement. The film is also notable for featuring Chris Cooke’s favourite ever line of dialogue: “To know death, Otto, one must first fuck life in the gallbladder!” And you can’t really argue with that. Udo Kier plays the Dr. Frankenstein role, with immense gusto and a script-mangling accent, constantly going on about trying to find the perfect ‘nasum’ for his ‘Zahmbie’ (the evening’s second nose reference).

It’s tricky, even now, to say what I think about the film. Essentially, it’s a three-hander, about a blind sculptor, who, with the aid of his mum, kidnaps a young model with the plan of making a sculpture of her. He disguises himself as a masseur, before slipping a chloroform-soaked rag over her mouth (what happened to chloroform? Once upon a time it was standard issue in all thrillers, now you don’t ever see hide nor hair of it. Did they run out or something?) and taking her (in a series of taxis – a blind man, an unconscious girl and a middle-aged woman – yeah, nobody will remember them…) to his home/studio, a large industrial warehouse in the middle of nowhere. 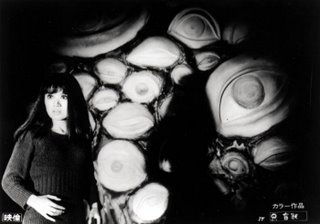 When the model wakes up, she finds herself in a large room in near darkness, the sculptor’s torch gradually illuminating the room to show that the walls are completely covered with sculptures of female body parts – a section of lips, one of eyes, a wall of legs, one of arms, even one of noses (see, it’s officially Horror Nose night). Also, dominating the space are two immense naked female torsos, one on its front, the other on its back, allowing for a scene where a blind man chases a near-naked girl over a pair of giant breasts. Obviously, this description makes it sound like it could be some kind of Russ Meyer style kitsch romp – but in fact the film totally eschews any notion of camp – in fact it doesn’t have any humour in it whatsoever. While the relationship between captor and captured develops (in a very Stockholm Syndrome way), there is a lot of talking – a lot of pretentious talking at that – all about inventing new forms of art and becoming one with your sense of touch. For about an hour, it feels as though it’s never going to get any closer to being a horror film than just the premise – but then, in the last half hour or so, it goes all ‘In The Realm Of The Senses’ (which was made about 6 years later – they must have seen this…) and enters some very dodgy territory – after the model is raped numerous times, she finds herself ‘softening her feelings’ towards her captor. Actually, the film is already a bit dodgy in its depiction of the blind man – with one of those cinema visual impairments which means that he can instantly sense the precise location of someone in a room, but struggles to find the handle of the door to the house he’s lived in for years. It’s another one of those disability=madness ideas that pretentious (and able-bodied) filmmakers seem to like to employ. (That reminds me of the time we went to see the remake of ‘The Hills Have Eyes’ - which shows disabled people as being evil, hideous, baby-killing freaks – and found ourselves sat behind a group of severely disabled people and their carers. Who the hell thought that was a good idea?)

Which isn’t to say that I didn’t like the film – the design of it is really unique and it actually works okay despite being so setbound precisely because of the madness of the visuals, and in the last half hour, it works up into something quite interesting about sensuality and pain. It’s just that it probably could have worked as a less pretentious film – more of a B movie. Still, it’s worth taking a look at, even if it depressed the hell out of everybody by the end.

We finished off with another film about disability, but this time one that is a real B movie – and absolutely revels in it, Frank Henenlotter’s Basket Case 2. Cooke and Gareth had seen this at a horror all-nighter years ago and found it really good fun, and thought it would be a good contrast to ‘Blind Beast.’ And it was – no pretentious dialogue, a much better discussion of disability issues and some of the most over the top prosthetics I’ve ever seen. The story is that, although presumed dead at the end of the first film, the Bradley brothers are taken to hospital in critical condition. 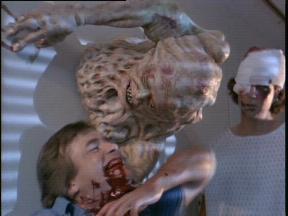 Through the psychic prompting of his deformed, maniacal former Siamese twin brother, Belial, Duane regains consciousness and the pair escape – and are picked up by Granny Ruth (Annie Ross) who runs a sanctuary/commune dedicated to ‘Unique Individuals’. And unique is the word, because this is where the prosthetics dept is running overtime – every single one of the people living there has a face so grotesquely deformed it’s like they’ve been sketched on a beermat by a drunk – one on them is all face, like a giant clam ( but has ‘one of the most beautiful voices I’ve ever heard’), another has a face shaped like a giant half moon. Another woman has a head like the handlebars of a scooter, while my favourite (naturally, given the themes of the night) is the man who has a face made entirely of noses. 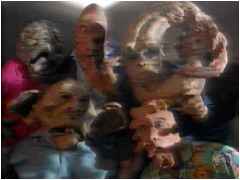 All of which seem to be constantly running.

It was good fun, and a great end to the night, although Cooke’s contention that it is a better film about being a twin than Dead Ringers is, to my mind, a bit strong. Yeah, it’s less pretentious, yeah it’s got a good message about not treating people who are different like freaks (albeit slightly undermined by the fact that all of the ‘unique individuals’ take part in murdering people who threaten them), yeah, it’s got a man with a face made out of noses, but Speaking As A Twin, Dead Ringers is the one that freaks me out. If you’ll pardon the expression.

So, we made it through four films, ending up at around 4.00 which isn’t so bad (previous nights have sometimes only limped on to about 2.30) – maybe it was good to have short films (nothing over 90 minutes) so that your mind doesn’t get locked into one position for too long. And all had the requisite madness that makes true horror. Although, maybe next time we should try for something more ear-centred.
Posted by Steven Sheil at Monday, July 10, 2006