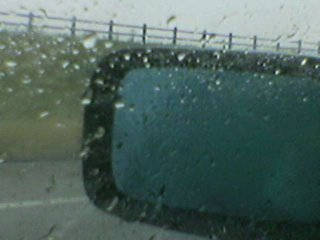 We drove up to the Lake District today – through hail and torrential rain for much of the way – not a good omen. As we got to the gate that leads up to Karen and Adam’s house, where we are housesitting for the week, Betsy, our daughter, exploded with vomit all over herself, the back seat and the luggage. While we cleaned her off, we discovered that the key to unlock the gate hadn’t been left for us, so Jeanie had to go off and get it while I hiked up the hill with a slightly stinky Betsy in her buggy. Half an hour later, regretting the decision deeply and on the verge of a heart attack, we finally reached the house. 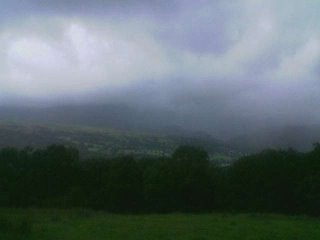 As Betsy chased the cats around the garden, I checked out the views from the house over the lake, which I’m hoping to use to double for the view from the shack. They’re fantastic, really dramatic – hopefully it’ll work okay. Then, I went to have a look at the nearby forest location, which I want to feature in the film.

There are a couple of very tall trees that have been blown over in storms which now lie on the ground, their roots showing and standing vertical, 10ft high. It was quite eerie – with the wind blowing, all you could hear was the creaking of other trees as they moved in the wind, giving the distinct impression that they, too, were about to come crashing down.
Later this evening, after it got dark, I went back out there with a torch, just to see how it looked at night – and managed to terrify myself. In the pitch black, the torchlight makes everything look alive and the darkness is thick with sounds and barely perceptible movements, all of which serve to set your imagination running riot. I don’t think we’re actually going to be able to shoot at night – I’m not sure how we could light it – but it was good to get the feeling that the character in the film experiences – that there is something out there, ‘life in the woods’…
Posted by Steven Sheil at Tuesday, August 01, 2006