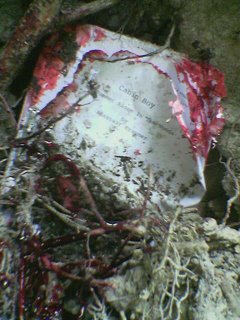 Woke up late – 8-ish – aching all over from having to run up and down the steep steps to the shack for half of yesterday. Today was always planned to be a lighter day – at least in terms of the amount of shots – but it was also always going to be the most technically demanding. We started off with the most difficult shot of the day – the shot with the camera flying through the trees. John had built a flying dolly – the treepod – which would carry the motorised head, underslung support and the camera. 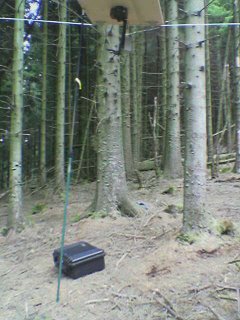 We used a ladder to get about twenty feet high up a tree and John attached a couple of lines which we then threaded down to pin into the trunk of one of the trees which had been blown over in the wind. 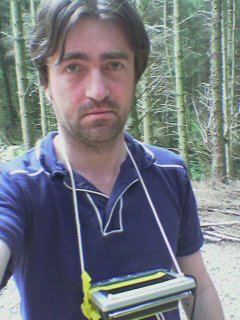 With a line attached to a portable screen – which I had hung around my neck like some weird learning aid – and one hand holding onto the controller for the remote head, and with John pulling the treepod along by a washing line pole we had numerous goes at getting the shot, eventually having to give up when we saw that the line had rubbed its way through one of the pulley wheels. It’s hard to know if we’ve really got the shot until I get into the edit suite and fiddle about with the speed and stuff, but I think we’ve got something to work with. 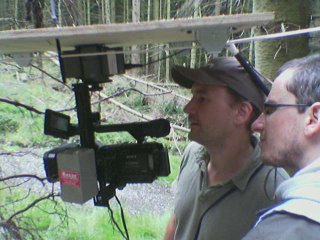 By this time, two men had arrived to start chainsawing the trees near the house, which meant that we had to shoot the whole of the next scene mute – a problem I’ll have to worry about in the edit suite.

After lunch, we did a couple of sequences involving jib shots – and had Matt running up and down hills for about two hours. By the time we were done, it was about five o’clock, and we still had the most complicated effects shots to set up. 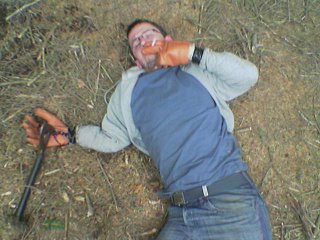 The last hour of the shoot was the most uncomfortable for Matt – he had to be pinned to the forest floor, unable to move one arm, with blood all over him and midges nipping at any exposed flesh. This was also make or break time for the tree demon – which by this time, was quite battered and bruised from all the transporting around. With the light fading, we got to it and, thanks to some great work by John Ross, I think we got enough to make the sequence work.

By the time we wrapped, I was knackered, bitten to fuck by forest insects (I found one living on my leg in the car home today), covered in dirt and blood and with calf muscles like lead, but watching the footage back last night, it seemed like we really got what we needed. Don’t know when I’m going to start editing. My first priority at the moment is sleep.
Posted by Steven Sheil at Sunday, August 06, 2006