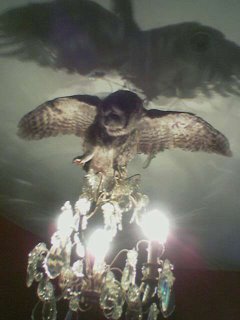 Matt and John arrived today - I think they were a bit freaked out by the remoteness of the cottage. And the rabbit's face on the wall. And the stuffed swooping owl in the dining room. And having to sleep in the room with dolls in.

Betsy had a nightmare last night - woke up crying about 'red'. Suddenly, 'The Shining' feels like a documentary.

This afternoon, I filmed an interview for Jeanie for one of her new projects, Born Lucky. It was with a man who had survived a plane crash that killed nearly 60 people 20 years ago. He was very matter-of-fact about it (without being flippant - it had obviously been a very traumatic experience) - and the story was fascinating.

This evening, I went out and tried to film a sunset - without much luck - a bit of red sky, but mostly black rolling storm clouds.

Stayed up too late than is good for me, worrying about whether I've thought of everything. First day of the shoot tomorrow.
Posted by Steven Sheil at Thursday, August 03, 2006