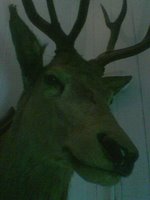 Woken up early (6.30 ish) by Betsy. Came downstairs past the enormous stag head in the hallway - Betsy giving it a cheery "'ello Bambi!'" as she passed - and looked out the window. Pissing down. Still. Suddenly got the fear that I'd have to rethink the whole film (or at least the exterior parts of it). 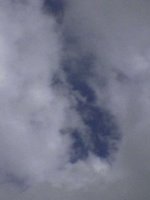 Kept going out and looking at the sky until finally a chink of blue appeared - the first since we arrived. Felt slightly more positive.


We went out to visit the shack today which gave me a chance to try and visualize how some of the sequences might work. It's goint to be a pain to get everything up there, because the approach path is pretty wet and treacherous. The cabin itself is pretty grim (in a good way). I hope that there's enough room once we get all of us + a camera + lighting + sound in there... 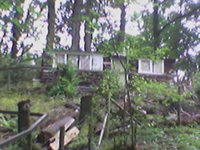 On the way back, we stopped in a small village and Jeanie inquired in a butcher's shop about some intestines which we're hoping to use for one of the scenes. The butcher cheerfully went outand brought back a large handful of various foul-looking organs, which he's said he'll save for us. What with the bag of meat I bought the other day before we left (just in case), it looks like we'll have more organs than will actually fit inside a human torso. Still, when it comes to bloody guts, I suppose it's better to be oversupplied than under.

This evening I went out and did some wild tracks in the woods. The trees were again bending terrifically in the strong winds, giving out a creepy creaking sound which I'm hoping the film can exploit. I felt okay in there (after slightly freaking out last night) until in the midst of sound recording a stream - and concentrating hard with my headphones on - I heard a whooshing sound behind me and turned to see a cyclist in full lycra come whistling past me, making me jump out of my skin. I think years and years of overexposure to horror films has made me overly suggestible. I managed to suppress my overactive imagination - not helped by Jeanie ringing me in the middle of recording some tree-creaking deep in the woods to tell me that all the lights in the house had suddenly gone out - long enough to hopefully get some good stuff - stormy winds, creaking trees, general oppressive forest atmos. Still need to shot list, storyboard, prepare props...

Came back with a head full of things to do to find that the electricity had come back on, just as suddenly. Bloody countryside.
Posted by Steven Sheil at Wednesday, August 02, 2006

not sure my last comment made it thru as i had the wrong password or something still...

... i am stuck here reading and writing notes as per usual... wish i was there really...

... the weather may add a lot - light and dark, dripping foliage, clouds across the sky... atmosphere

... unless the atmosphere you were after was a surprisingly clear blue sky (which may be washed out on tape anyway)...

i mean in the way they say it on theatre things and that.

read a good thriller script - had a great argento styled stalking scene that i would gladly steal if i didnt have a conscience.