The Fear of the Daft 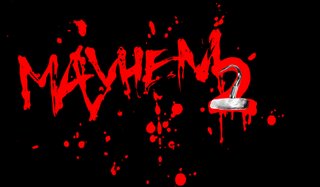 Mayhem, the horror film festival which I help to organise, along with Chris Cooke, Gareth Howell and the Bang! Short Film Festival, screened on Sunday night at Broadway in Nottingham. We had a programme of shorts, a mixture of local and international films, followed by a special preview screening of Michael J. Bassett's new British horror 'Wilderness'. It was a good turn out - probably over 200 people, and we had a great reaction to everything we showed. Probably the most talked-about film was the Brazilian short 'Love From Mother Only' by Dennison Ramalho, which was a full-on tale of sex, Satanism and possession. Another fim which went down really well was 'The Weight' by John and Tom Turrell, a story of an affable psychopath and the perils of local small ads.

Watching the shorts it was interesting to see what influences were prevelant. Certain elements of Asian horror seem to be quite popular, with scary children, faceless apparitions, psychological drama and quick cutting all making a good showing. There were fewer films that went for gore or monsters or witchcraft, but then maybe that's just down to the current climate.
I think that sometimes people are scared of things looking daft - they don't want to try too much gore, or too many full-on effects because they are really hard to make convincing on a really low budget. Also, I think that sometimes people who aren't into horror so much, make films which reference horror genre set-ups or images, while at the same time presenting themselves as being about something 'more'.

I think I want to encourage people to go for it a bit more. Next year I'd like to see a wider range of horror, without the fear of things looking silly, and without the need to make things appear more 'serious'. Most horror stories have a certain amount of daftness built in - there's always the fear that if you make something that's supposed to have a monster in it (of whatever kind) that you're going to be laughed at. But I think people like to see stuff that takes them outside of their comfort zone, or at least attempts to. 'Love From Mother Only' was quite extreme - big devil statues, evisceration, talking beating hearts - but people loved it and went a long with it. However that was a comparatively big budget short, shot on film with a large crew and some money to spend on effects. The challenge for local low-budget filmmakers is to try and do something that would have the same effect, but made for tuppence. Which is hard, but not impossible. And sometimes the attempt is enough to carry things through. I like films that don't play it safe, that face up to the fear of the daft and plough on through it.

This isn't to have a dig at anything that we showed, or anything that was submitted, because we are all madly grateful for people's interest in and support of the festival. I think we have the possibility to build up a thriving horror scene in the region and hopefully Mayhem is going to continue to be a central part of that.

Read the BBC review of Mayhem 2 by Paul Bradshaw
Posted by Steven Sheil at Wednesday, May 31, 2006