With Through A Vulture Eye finished, I’m trying to get on with planning another new short – ‘Awake’. It’s the one about the guy in the woods. I’ve got a basic storyline worked out, but haven’t yet written it up into a script, because I’m still thinking about how (or if) I can do certain effects. One thing that I’ve wanted to do for a long time is to get the idea of the camera ‘jumping’ from tree to tree or from one wall to another. I think I’ll probably end up doing it with a jib, but I did spend quite a bit of time over the weekend trying to design some lightweight, cheap and easily assembled portable structure that would give me more of a ‘monkey jumping’ look. Unfortunately, I’ve no background in engineering or design, so everything I did looked like something a seven-year-old would send in to Blue Peter.

I’ve always liked trying to figure out this kind of stuff – how to get the camera into places where it can replicate an unnatural point of view – not just for the sake of it (I never really like those shots that you often see from the inside of a fridge when someone opens the door – I always end up wondering if we’re supposed to imagine someone inside of there, or that the yoghurt is somehow sentient), but because they can quickly give the idea of a different presence in a film.

I used to teach an evening course in Directing Drama for Broadway cinema and one of the things I ended up talking about was ‘human’ and ‘inhuman’ points of view (people would write these phrases down and I’d worry that they’d think they were industry standard, rather than just me making stuff up). In most realist dramas, the camera often adopts a ‘human’ point of view – it will be positioned somewhere which could potentially be conceived to be where someone watching the scene might be standing. In these instances, the camera is unobtrusive, we as an audience understand it to be an invisible, concerned (or dispassionate) observer, and we subconsciously identify with it. When the camera adopts a position that would not be normally accessible by a human (looking down from the ceiling, up from the floor, from inside an inanimate object), we as an audience imply the existence of an ‘inhuman’ point of view – which is not to say necessarily something supernatural or monstrous, but something which is outside of the human context of the scene. In horror films, the ‘inhuman’ point of view often does represent the monster/the killer/the ghost’s perspective, but in other genres it can also indicate the presence of an outside entity – perhaps the filmmaker(s) themselves. (This is precisely the issue that Haneke’s ‘Hidden’ toys with – the camera shows a scene which, within the world of the film, can’t exist – no camera can be in that position. The only way to rationalize the presence of the footage is to suppose a point of view which exists outside the world of the film)

For me, the presence of ‘inhuman’ points of view in films suggest either an inhuman presence within the film, or an ‘extrahuman’ presence outside of it. ‘Hidden’ is full of these ‘extrahuman’ shots and pushes them to the forefront in a way that most films don’t. But then ‘Hidden’ is concerned with the viewer (who’s watching, from where) in a much more explicit way than most other films, and this is possibly why it has sparked off so much critical debate – it plays on the key element of filmmaking: watching.

My last three films have all featured the idea of watching and seeing quite heavily, and I always try and nail down exactly why any particular shot is from a particular point of view (I’m not claiming to be different from any other filmmaker in doing this, but I guess it’s just something that I’ve had to learn to develop as I’ve been going along, and it is something that I’ve come to observe myself thinking about.)

In each of the three films, I’ve used different camera and post-production techniques to suggest both ‘inhuman’ and ‘extrahuman’ points of view. In Autopsy, I used a miniature black and white spycam (which we could hoist onto the end of a boom pole) to suggest a ghostly presence, and also developed a way of shooting a scene as a triptych (basically, three shots from the same camera position, but panned off to show different, overlapping parts of the scene which are then knitted together in post to give a kind of widescreen montage look) to emphasize the idea of being watched. In Cry, I used another miniature camera, this time in colour, to suggest the idea of a possessed room – we clamped it high onto the ceiling and had it move jerkily (in an early attempt at the ‘monkey jumping’ shot), we put it inside a door which was being hit by a hammer, and in a phone which the lead character was picking up. We also pushed it through the door, the window and a hole in the floor (which involved Cooke going down into a very spidery cellar and poking his hand up through the floorboards like some weird glove puppet). 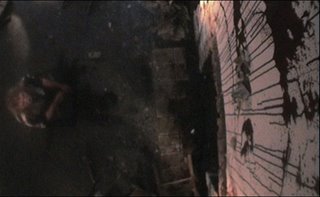 For TAVE, I used a couple of lenses which I scavenged through an old projector to replicate a rounded, fisheye shot, like the image on an iris. I guess the reason I like doing this kind of stuff is that I like the idea of creating points of view in camera – inventing a presence while you are actually there on set, rather than affecting stuff in post. Also, I kind of like using non-standard cameras and lenses – you get a different texture to the image that really helps with creating these ‘inhuman’ points of view.

So, at the moment, I’m sketching weird tree-based devices and trying to work out how cheap and yet effectively horrific I can get the short to be. The strangely ironic thing is that I have, supposedly, got funding for another short, but it’s taken so long so far to get it sorted out (three months and counting) that I’ve had to put it to the back of my mind. Maybe it’s for the best – if it gets me making other shorts, then maybe it’s a good thing. But if anyone has a trained monkey who can operate an HD camera, let me know.
Posted by Steven Sheil at Tuesday, May 02, 2006