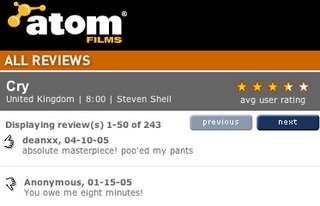 I heard this week that Through A Vulture Eye is going to be shown at the 5th Fantastic Films Weekend at the National Museum of Photography, Film & Television in Bradford at the end of next month. The same festival showed Cry a couple of years ago, and gave it a great review, so I’m really glad that TAVE is going to be screening there as well.

I also emailed Atomfilms this week to find out about how Cry has been doing on the site. (The deal with atom was made by the former distribution company for the film, so I’ve never had direct contact with them). The film’s had about 250 reviews on the site, ranging from the fantastic “this is the BEST short film I’ve ever seen!” to the vindictive “You owe me eight minutes.”, so I figured that there would be maybe about a thousand viewings. As it turns out, the film’s been seen over 72,000 times, which is a bit mind-boggling really.

I’m still trying to gear up to shoot my next short ‘Awake’ some time in June, schedule, weather and location permitting. It’s good to have other things to concentrate on, because the short I had planned to do and am supposed to have funding for, ‘Deliver Me’ still seems to be stalling. I’ve no idea what the hold-up is, but I do know that it’s been four months since we got told we been successful in applying, and we still haven’t had a confirmation of the money, let alone any cash. I’m trying not to let it get to me, but it feels like a lot of the momentum has been lost.

Anyway, I’m trying to concentrate on ‘Awake’ and also on preparation for ‘Mayhem’ at the end of this month. I’m editing a specially designed trailer for the festival next week, as well as the final showreel. It should be a good night.
Posted by Steven Sheil at Wednesday, May 17, 2006