Three weeks today we start shooting on “Deliver Me”. We’ve been in official pre-production for a couple of weeks now – and it looks as though we might actually get our first invoice paid by Em-media sometime next week, which is good because it'll mean that we no longer have to be relying on the Bank of Pawlik to cashflow everything.

We’ve got two main locations already, with one still to find, all of our crew are in place, but none of our cast – which is quite scary at this stage. I was planning to go through casting tapes today, but they haven’t arrived yet, which has left me at a bit of a loose end. I was also supposed to be seeing Cooke to talk about the storyboard, but he’s at home dosed up on Strepsils. So I’m trying to get my mind back on three of four of the other 1000 things I’ve got to get my head around, but I’m finding it difficult to prioritize what I’m supposed to be thinking about.

There are a few things that I’ve scripted which I’m unsure about – either in terms of their story function or the way I’ve planned to shoot them and much as I want to use this opportunity – having a budget, having a large-ish crew – to experiment, I also don’t want to waste time on things that don’t end up in the film. I guess it’s about balancing risk against return.

Yesterday we were investigating a couple of the risky elements, which meant spending the morning in a laboratory and the afternoon in a sex shop. The lab visit was to explore a lighting technique I’m interested in trying out which sounds as though might be feasible – it basically involves using flat, flexible, luminescent sheets – but may not give us the amount of light we would need. The scientist we spoke to about it was really helpful, but when he was explaining how to rig up the device – “it’s really simple ..” - I got lost in a maze of resistors, capacitors and alternating current. If we go ahead with it, it’ll mean getting somebody in who isn’t a complete dolt when it comes to electronics.

As for the sex-shop - well, without going into too much detail, we were looking for some latex parts to use as props for a particularly ambitious (and potentially appalling) shot which I’ve put into the script. This is the difficult one – I don’t want to spend too long thinking about how to do this – because it’s technically very difficult – in relation to the likelihood of it being in the finished cut. Also I don’t want to get told off again by a sex-shop worker for removing sex aids from their boxes and analyzing them closely while Cooke looks on, scratching his chin like he’s on a particularly filthy edition of Antiques Roadshow.

As I’ve said, I’ve also started storyboarding. I am quite possibly the worst artist in the world, which makes this difficult – a fact bought home to me when I was teaching this week and illustrated a point on shot listing with this. 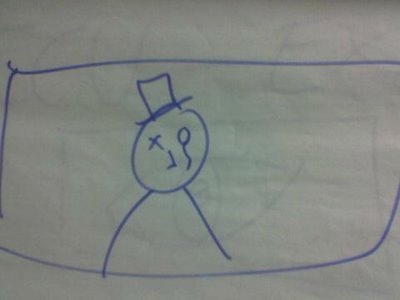 I really envy people who can draw (and people who can sing – another thing I’m absolutely appalling at). But as I tell my students, as long as you can communicate what you need to, to the people who need to know it, don’t worry about your artistic skills, or lack of them. (Even if it looks like you’ve held the pencil in your mouth. While chewing a large and violent wasp. With someone else’s lips….) As long as the message gets across, that’s what matters. 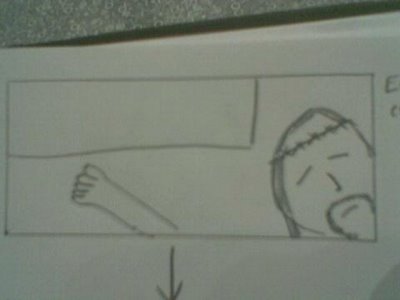 And at least with a story board this bad, it’ll make the actual shots seem that much better – as long as they’re not filled with weird clown-eyed toffs...
Posted by Steven Sheil at Friday, November 24, 2006