Mushing Together Sex and Horror 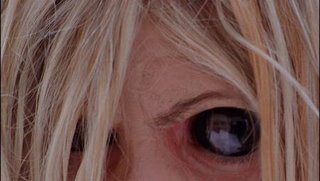 A few days ago - after much prompting from Cooke - I finally got around to watching Dario Argento’s episode of the Masters of Horror TV series – “Jenifer”.

I’ve been a big fan of Argento’s for about five years, ever since I saw “Deep Red” and even though recent films like “Sleepless” and “The Card Player” are way off his absolute best, there’s always something in his films that’s memorable and provocative. With “Jenifer” he has a lot of fun referencing Beauty and the Beast (the fairy tale rather than the Disney singing telephone film (or even the Eighties big hair fantasy drama ) ) and Frankenstein while at the same time exercising his own preoccupation with duality and the meshing (or mushing ) together of horror and desire.

Based on an old “Creepy” comics story, “Jenifer” is about a cop who saves the life of a young woman, about to be murdered by a formerly well-respected man now reduced to vagrancy. The young woman – clad only in a flimsy flighty summer dress – has a great body but a hideously-disfigured face. Unable to speak, she instead makes half-animal, half-childlike noises – whining, crying, growling, sometimes almost purring. 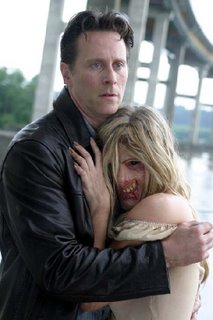 The cop, on finding out that she has nowhere else to go, decides to take her home and put her up at his house for the night. However, in a shining example of HusbandDickery, he doesn’t bother to wake his wife and tell her that he has given couchspace to a hideously-deformed, but scantily-clad woman-child – (and this the day after he’s tried to force his wife into rough anal sex while remembering his first glimpse of Jenifer – bound and bent over an old oildrum, a machete raised above her head ) – so that when the girl appears in their bedroom the next morning she scares the life out of both his wife and his teenage son – who recovers his wits quickly enough to note “hot body!”.

When his wife insists on getting rid of Jenifer, the cop drives her out to the wilderness (like he’s getting rid of a stray dog ) but can’t seem to let her go. Jenifer – obviously fixated on the cop – starts nuzzling up to him in the car and before long they’re fucking on the front seat – roughly, animalistically. It’s all wrong – not because she’s deformed, but because she seems so childlike – and like an animal at the same time – she’s sexually aggressive, but like a dog in heat.

The cop (continuing the HusbandDickery ) brings Jennifer back (‘hey, she can’t speak, how’s she gonna tell anyone…’) and while he and his wife argue, Jenifer runs upstairs to the bathroom – from where some strange sounds soon start to emanate. They rush upstairs and find Jenifer crouched over the eviscerated body of their cat, filling her mouth with its guts. 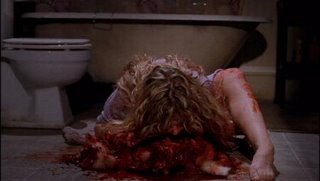 This, unsurprisingly, is the last straw for his wife, who leaves, taking the son with her. The cop, momentarily wondering what he has got himself into, soon has his mind taken off this by having some more rampant sex with Jenifer.

You can kind of see where this is heading, and it doesn’t surprise you when we find a replay of the opening scene at the end, but the tone of the film – with its deep black humour and strange, dreamlike feel - the cop seems intoxicated long before he starts on the brown paper bag – really reminded me of Argento’s section of ‘Two Evil Eyes’, ‘The Black Cat’, which is another tight little piece (again an adaptation.)

Of course, lots of Jenifer is quite hokey - and in this it maybe shows its comic book roots – there’s a freak show in town, for example (do they still have freak shows? ) and the cop ends up getting a job as a handyman in a local store (which is a job a hobo in the 30s might get ) - but then Argento’s never exactly been one for a gritty realism – and the story (rather than the plot ) is what he’s interested in.

The film is tightly shot, with some great makeup effects, and it never drags. Some people have complained it’s not scary, but then I never think horror films have to be – they can be, but a lot of horror films I see work because they’re horrifying rather than scary. And Jenifer is horrible because of what is says about male desire and the link between sex and horror – and because it doesn’t explain everything away.

Apparently, there were couple of deleted scenes (which caused John Landis to freak out) which show how far Argento’s prepared to go with his imagery and I think it’s a shame they weren’t included – not out of a gratuitous gore-thirst, but because I think they would have really pushed home the monstrous sexual element of the story.

Good to see that he can still push the boundaries in an interesting way. Now bring on the new Three Mothers film...
Posted by Steven Sheil at Monday, November 06, 2006