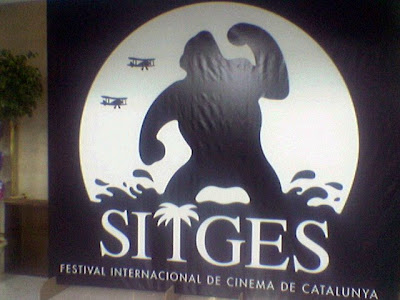 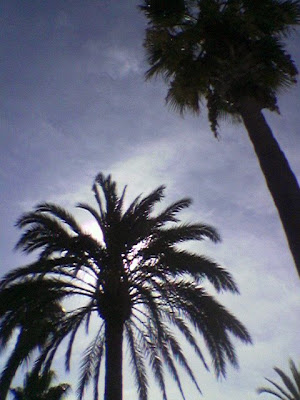 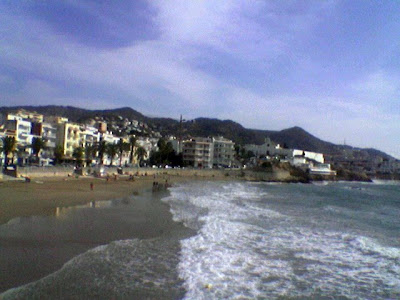 Last weekend 'Mum & Dad' was playing at the Sitges festival in Spain and I went over for a couple of days, flying out from East Midlands Airport late on Friday night on a plane filled with hen weekenders (if anyone's looking for a safe investment in these troubled financial times my tip is put your money in these).

I arrived too late at the hotel to get the chance to see any of the festival on Friday night - which was a shame, because it was the night of a massive Zombie walk on the beach, apparently opened by George Romero - so I just got an early night (although I did entertain myself briefly by pretending to have a massive cameo head). 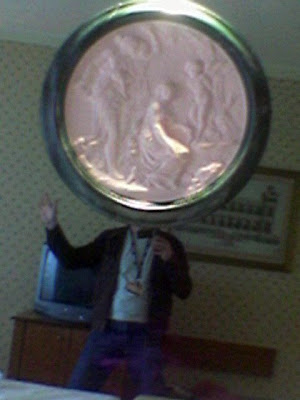 I did get my festival pass though, complete with alternative spelling of my name: 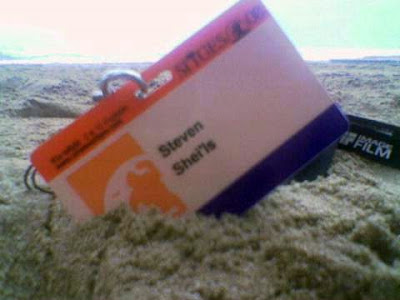 I might adopt it in a Lars 'von' Trier kind of way.

Next day I was up early, and belatedly realised what a great view I had from my room window.

I had a quick breakfast then headed off to get tickets for a couple of films. I went to see 'Donkey Punch' (which I've missed up till now, despite it being on at Edinburgh and already come and gone on theatrical release) at the Casino Prado, a very old venue in the middle of the town, with a terrifically ornate stage and ceiling, and balconies. 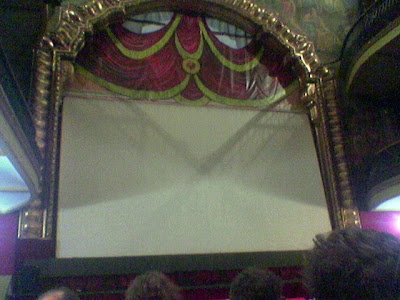 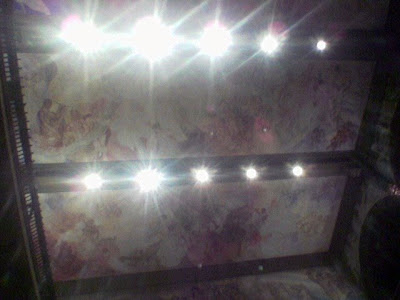 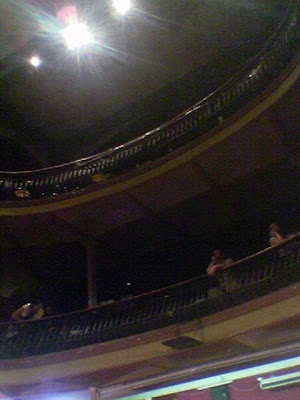 The film, like everything else at the festival, played in its original language with Spanish and often Catalan electronic subtitles, and got a big cheer when the title at the start 'Mallorca, Spain' came up (in fact, audiences were very vocal throughout the whole festival, cheering and clapping loads). After the film, I had a couple of hours to kill, so I walked down to the beach, where I had a bit of a paddle 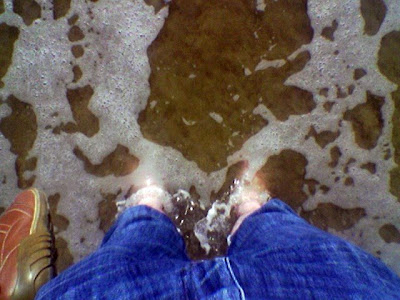 and basked in the hot sun. When I say bask, I mean squinted uncomfortably, obviously. 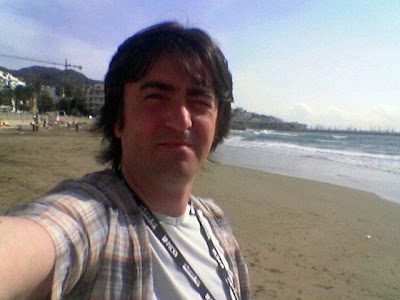 Next up, again at the Prado, was a 35mm print of 'King Kong'. Funnily enough, this was the film I was really desperate to see at the festival, having never seen the original film on the big screen. It was great, watching it with a big, enthusiastic crowd (including quite a few kids). It's been a few years since I watched it (I think the last time was about a month after my daughter was born when I found myself up all night rocking her to sleep and happened to find it on telly), and I'd forgotten how brutal it is - Kong rips the T.Rex's jaws open to kill him, bites quite a few sailors to death and treads at least two native men into the ground. He's a real monster - a fact which the remake seemed to soften quite a bit, what with the needless ice-skating crap at the end.

'Mum & Dad' was part of the festival's 'Midnight X-treme' programme, which meant that it was playing third on a bill of four films, starting at 1.00am, so I had a lot of time to kill before the screening. 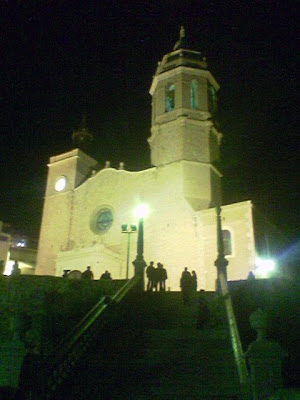 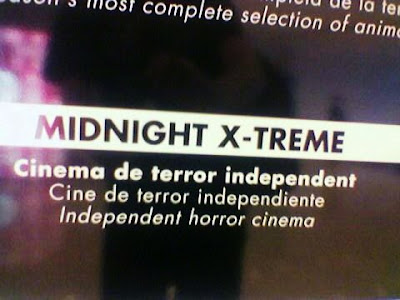 I couldn't get any other tickets for the evening films, so went for a meal - the festival gives guests a load of food vouchers to spend in local restaurants, and though it was tricky trying to find anywhere that did anything remotely vegetarian, I ended up in a great place where the staff were really attentive and the food terrific, all pomegranates and walnuts and gorgonzola and African chocolate cake and stuff. After that, I headed over to the Retiro cinema to see if I could get in to see JCVD, the new film with Jean-Claude van Damme playing himself - an ageing action star caught up in a bank heist. I managed to flash my badly-spelled laminated pass and get in, where the cinema was packed. (It was the same in Germany - Jean-Claude must have one hell of an international fan club...)

The film seemed good - I say 'seemed' because it played in French, with Spanish subtitles, with only about 10% of the whole film being in English (I'm sure the trailer's in English...) which meant that with my severely limited knowledge of those two languages (mainly glommed from episodes of 'Dora the Explorer' and watching 'Betty Blue' as a teenager) I didn't make out everything that was going on, although I got the jist. The film's got a great opening shot (to a great song, though I can't for the life of me find out who it's by) and JC seems to take the piss out of himself quite well. I'm going to look forward to seeing it properly when it gets a release over here.

After 'JCVD' I went outside to see how the crowds were building for the all-nighter. I'd worried about it being a bit of a graveyard slot, but the place was packed, with queues round the block. 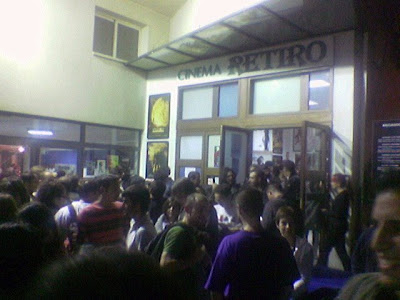 Before the screenings started, I had to stand up at the front - being the only filmmaker present - and do my normal intro spiel, which was translated by the guy introducing the films. Again, the crowd were great, cheering the allnighter, my introduction, the mention of the budget and a few points in between. Then the first film started - '100 Feet' ('cheer!') by Eric Red ('big cheer!) - a story about a women who is tagged with an electronic device so that she can't leave her house, after being released from prison for the manslaughter of her physically abusive husband, who was also a cop, whose partner is now in charge of her case and hates her for it. I'd heard some mixed reviews of the film (but then I've heard some mixed reviews of my film, so who knows...) but I really enjoyed it - it was solid genre fun, with some good scares, a couple of great set pieces and decent effects. The crowd loved it too, cheering wildly at the most gruesome death in the film. After that it was 'Acolytes', an Australian film about a trio of teenagers who stumble across the dumping ground of a serial killer, then track him down - and start to blackmail him to kill the bully who's been hounding them. Although it started slow (and a group of lads in front of me were, by this point, cheering everything - each credit in the opening titles, the first shot of a girl running, a close-up of a butterfly - until the rest of the audience told them to shut the fuck up), it had a good set-up and some nice moments of 'River's Edge' style teenage callousness, but by the end it had got a bit too twisty-turny for its own good (and by this time it was 4 in the morning, so not the best time to be trying to retrospectively tie plot points up together). Still, I enjoyed it.

Then it was time for 'Mum & Dad'. I stayed in for about half the film - they'd put me in a little side-box with chairs in to watch the film, which meant that I could get in and out quite easily. It was strange seeing the film with subtitles - some of the nuances of the dialogue seemed to get lost (or maybe some of the lines are too British to resonate with the Spanish (or maybe they just didn't think there was nuance to get), and some things that normally get a response in the UK didn't translate, but it seemed to go down well. We got some good cheers for the deaths in the film and a great round of applause at the end. A few people come up to me to say well done and give me a thumbs up (unless in Catalan that means something totally different...) before I slunk off to bed - after the JCVD incident, I didn't fancy attempting 'Tokyo Gore Police' in Japanese and Spanish.

Next day, after about 4 hours sleep, I checked out of the hotel and spent the rest of the day wandering Sitges before my late evening flight back home. I kind of wish I'd been at the festival earlier - this was the last day, so there was nothing much going on - and been able to see more things, but at least I got to have a paddle in the sea again.

On the plane on the way home, trying to take my mind off the turbulence, I munched on some themed sweets 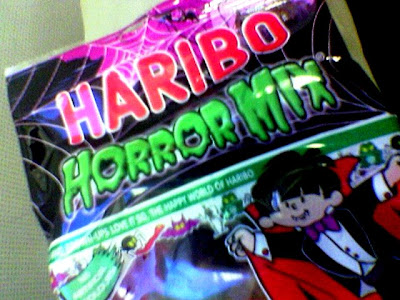 and read another book. After Pynchon last time, I went for something pulpier, namely this: 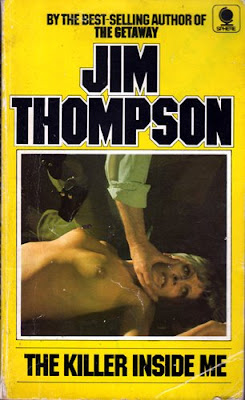 (Complete with trashy 70s cover, designed to make you look like a sleazy misogynist whilst reading.) I first read 'The Killer Inside Me' about 10 years ago and it's always stayed with me. It's a great, brutal, twisted story about a small-town deputy called Lou Ford (from whom this band took their name) who presents a face to the world of being a slow-witted fool, while hiding 'the sickness' inside. Hey, Stanley, what do you think about it?

Yeah, me too. After finishing the book, I got to thinking about how it'd work as a movie, and when I got back I looked it up, to find that there was a version of it made in 1976, starring Stacy Keach (which sounds like pretty great casting to me) - which was a bit TV-movie-ish, but also that there is another version currently in development. Part of me really wants to see it, while another part of me hopes it never comes off so that in my fantasy career, I get to buy the rights and do it. Hey, maybe JCVD would be interested...
Posted by Steven Sheil at Friday, October 17, 2008