Beyond Reality, Beyond Comprehension, Beyond Imagining...

After posting my car boot haul of horror VHS tapes the other day, I found out that Final Girl had also recently been on an 80s retro tape tip. There must be something in the air. (In fact, Chris Cooke was talking the other day about doing a really lo-fi film festival where you only screen from original 80s VHS tapes. Instead of a cinema, there'd be a big room with loads of sofas and a fridge full of beer, and the tapes would all be on a shelf like in a video shop. He'd call it 'Tapestock.')

Anyway, in further honour of the great cultural artifact of our time that is the Eighties Big Box Horror VHS Video, I present the worst cover in my small collection, bought at a charity shop in Sherwood last year. I give you Beyond Evil! 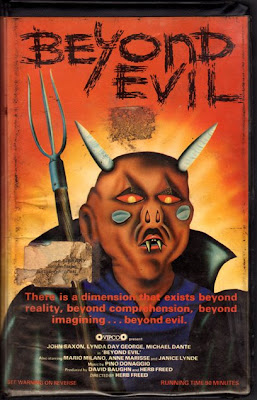 Now, as with many of my purchases, I've never got round to watching 'Beyond Evil'. which is apparently a wannabe giallo thriller with atrocious effects and John Saxon, but nevertheless I find the cover oddly spellbinding. In the annals of bad cover art, I think this holds a special place, being probably the least scary demon I've ever seen. I mean, look at him - piggy nose, tiny fangs in his tiny mouth, above which sits either a John Waters 'tache or, I dunno, a gaping hole? Then there are those things on his cheeks - what are they? Blue walnuts? Squirrel brains? Topping it off you've got sad eyes, pathetic ten-to-two horns and what looks like a child's pitchfork poking out of his disco collar. It's so far Beyond Evil that it's gone round the other side and is Entering Stupid. One of the reasons I haven't watched the film yet is that I couldn't bear to see the film and find out (as is highly likely) that nothing resembling this demon actually appears. Although I guess I would at least get a explanation behind the cheeks...
Posted by Steven Sheil at Friday, September 26, 2008