This Sunday, anticipating the imminent vanishing of the sun for the rest of the year, we packed up a load of random crap from our house and headed out to Bottesford car boot (just off the A52) for the first time in ages. We were selling a pile of books, boxes of comics, some children's toys (when we could prise them out of my daughter's hands) and various oddments like a compact lightbox in a briefcase (which attracted a lot of attention, and which we could have sold easily, as long as we'd have priced it at a pound (in fact, you could pretty much have sold anything at a pound, it was the default 'make me an offer' offer, regardless of the price you put on anything)). We did okay - about £70 - but we maybe need to hone our selling a bit more. My one inspired moment of Budget Apprentice-style salesmanship was to take the book on Hitler which was at the back of one of the boxes and put it face up at the front. I bet Jeanie that we would sell it within five minutes. Before I even finished the sentence, we heard a bloke go 'Oh, Hitler, he's my hero!'. The enthusiastic purchaser was about 30, shaved head, big fella, with tattoos all over his arms, and, worringly, over half his face in a kind of Maori/Orc mix. He was with his mum. While she paid Jeanie for some of her lovely fairy cakes, he enthused about how Adolf had the right kind of ideas and how things would have been much better if he'd won the war. His mum just shook her head, wearily, and tutted under her breath, like he was a four-year-old wiping bogies on her coat. (This isn't to say that the people of Bottesford are Nazis, by the way, just that anything Hitler-related seems to sell at car boots wherever you are. It's one of the eternally bouyant markets - Hitlerania...). The book was just a plain biography, bought when I was studying German, but selling it made me remember that it's actually the third book about Hitler I've owned - the other two were 1) a luridly packaged NEL paperback called 'The Insane World of Adolf Hitler" (not related to this bloke) and 2) The Greatest Pulp Novel I've Ever Read: 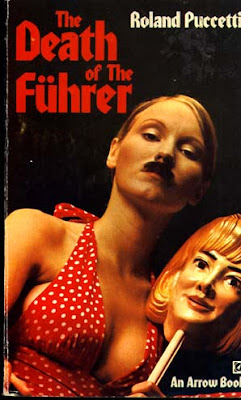 I used to have this book, years ago, bought because I thought the cover was funny. I read it immediately - probably at about the speed it took to write it, because it was just about the most insanely plotted thing I've ever read. From what I can recall, the story concerns a spy (lets call him James) who is sent undercover to a German castle, because the British government have heard that the castle's owner, a beautiful blonde Countess, is part of a neo-Nazi cell. James infiltrates the castle, meets up with the gorgeous blond Countess and then, as spies in luridly packaged pulp novels do, starts having sex with her. It's during the sex that James starts to realise that there's something a bit odd about the Countess, especially as she starts to lose control of herself - it's almost as if her voice, her whole manner changes. Finally, at the point of orgasm, with the Countess frothing madly and Seig Heiling on top of him, James realises the awful truth - the Countess may have the body of a beautiful blonde Aryan aristocrat - but she has the brain of Adolf Hitler!

Yes, Evil Nazi Scientists managed to save Hitler's brain, transport it out of the Berlin bunker, keep it alive for years, and then implant it into a curvaceous blonde countess. Obviously at this point in the novel, a few questions come up about what exactly Countess Adolf thinks she's doing...but these are quickly wiped away as the book becomes even more crazed and ridiculous. After discovering the Nazi's plan, James is knocked out and captured. When he comes to, he discovers that the Evil Nazi Scientists have been working on him too - they have removed the top of his head and started experimenting on his brain! Apparently though, they got called away mid-Evil to do some other fucked-up thing (sewing batwings to monkeys or something, probably), so poor James is left there, brain open to the world. How does he escape this predicament? Well, being very, very careful not to spill any precious brain fluid, he reaches over to pick up the top of his head from the plate next to him, and very, very carefully, sews it back on. Yeah, that's right. Take that Rambo, you lightweight. With his headcap stitched on like a pissed dad sewing on a scout badge, James heads off to confront the Nazis...

But how does it end, you ask? How do you surpass this madness? Well, I never found out. You see, in an unexpected development that I'm still not sure wasn't some kind of hideously elaborate practical joke, the last thirty pages of the book were misprinted. Instead of the conclusion of 'Death of the Fuhrer', it was a Mills and Boon romance about a doctor called Clive and a nurse called Jenny and their tepid light petting. If you can imagine how pissed off I was, it's probably nothing compared to the poor soul who was reading Barbara Cartland's 'The Heart Surgeon' and found the climax involved a lot more Nazis, spies and brain-stitching then he or she bargained for. 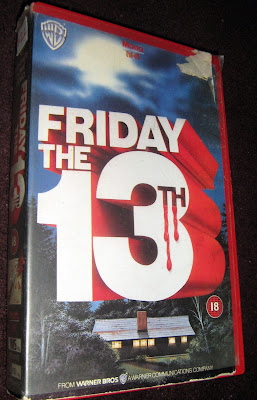 I've never actually owned this, so it was a good one to get. 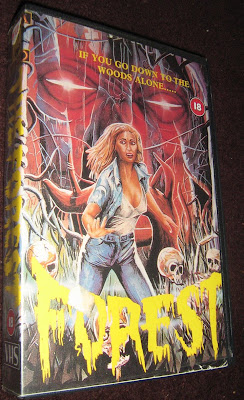 I'm a sucker for anything with a drawn cover. Even when it looks like it's drawn by an 8 year old. Ditto with this one, although I've no idea what's supposed to be going one here - a bloke growing out of another bloke's head holds the body of a masked third bloke like a knife? The back cover promises "Fetishism, Machismo, Misogyny are but some of the ingredients of this suspense riddled horror thriller." Ah, the 80s, when misogyny was a selling point. And films could be riddled with suspense. Like woodworm. And finally: 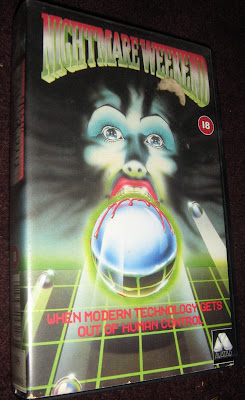 This film has a series of the worst reviews I've ever seen (although it was played though till the end, so someone must have made it through), but the premise, set out on the back cover, sounds intriguingly nuts - " Nightmare Weekend is the story of a desperate, evil woman who manipulates a computer with the ability to warp people's minds, by shooting a tiny silver ball through space which then implants itself in the head of its unsuspecting victimes transforming them into crazed mutantoids". A posting on the film's IMDB page purports to tell the real story of the film's production, so I'll leave the last word to them:

I was the on-line producer of "Nightmare Weekend" and was responsible for casting it. I have to agree that "Nightmare Weekend" may be the worst movie made of all time. The very fact that it has been considered for this category should speak volumes. However, while there is truth that this film was made for a direct-to-video release as was popular in the 80s, the film started with good intentions and a decent script. The problems arose when the co-executive producers, (all from France and England) who were supposed to put up their 50% of the $750,000 budget decided that in lieu of $, they would provide a script (horrible - written in French), a director (whose only credits I was told were porno pix out of Thailand, a film crew (again, all from France) and some equipment. We never got our money's worth. When we (I represented the American contingent) looked at the script, I hired a new writer (American) to re-write the entire thing. However, when we finally arrived on location in Ocala, Florida to begin shooting, the French writer had once-again re-written the entire film on instructions from the co-executive producer, an Indian chap named Bachoo Senn from India/London. It was a joke but once on location, there was little we could do.

All the young actors and actresses were having sex with one another (not that we cared). The acting was appalling, although I did take great pride in casting Dale Midkiff and Andrea Thompson, both of whom went on to somewhat successful careers. I gave up my dreams of the film business (having obtained my BA in film from Univ. Miami, Fla.) and now find the entire event amusing. I currently practice law on Wall Street. The only good thing to come out of that film was my daughter (now 19) who was conceived on location. Hope this clears things up for some readers.

By the way, I played the gas station attendant only because they needed someone and I happened to be there! Perhaps I stole the show."
Posted by Steven Sheil at Monday, September 22, 2008

Great post Steven. Somehow I feel the Bottesford Fuhrer is not ready to dominate western Europe if his mum still buys him books.