No posts for a while, due to a few extenuating circumstances - 1) Christmas, 2) going away to America, 3) being up to my neck in writing a new script, 4) being completely talked out about 'Mum & Dad' and 5) a virulent stomach bug that passed through my family like a soul-possessing demon made of vomit. Charming, I know.

For anyone looking for some of the press reaction to 'Mum & Dad', I've been maintaining a library of scans and links on the film's Facebook fan page, where there's also details about upcoming screenings of the film. It's been strange, having the film out there in the public. We've had some great reviews, but some people have HATED it. I got called a 'nitwit' by the Daily Mail (but then, if we'd got a great review from them, then I'd figure I'd been doing something wrong...), The Times found it 'bonkers', Metro called it 'a work of staggering bad taste' (hey, in some quarters that would be considered a recommendation...) and Little White Lies called it 'a vile piece of masturbation' (they've changed their tune.) Some of what people were complaining about concerned the idea that the film was 'based on the story of Fred and Rose West'. Despite me saying, whenever I was asked, that I didn't base it on anyone's story, it all just came out of my own head (better out than in, I always say), it seemd to become one of the 'facts' about the film. Weird.

But, to be honest, the negative reviews were in the minority, so I could deal with that (although they did upset my Mum a bit), especially as they didn't seem to harm sales of the DVD, which have been really good so far. It was very strange going into shops and seeing it on the racks, like here, a couple of weeks ago, in HMV in Oxford Street. 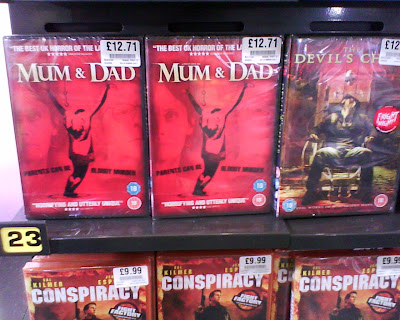 Or even in the airport, on our way to the States. 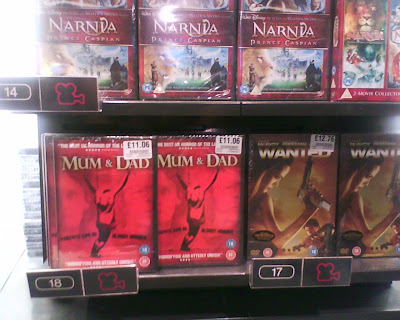 (Although my favourite sighting was a few days ago in a WH Smith's in Nottingham... 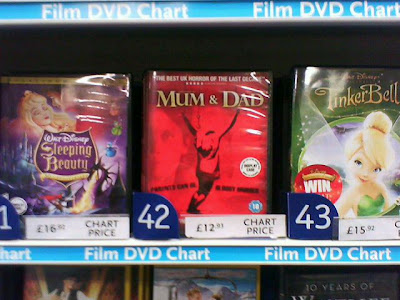 ...sandwiched between Tinkerbell and Sleeping Beauty, which, as the father of a five year-old girl, pretty much sums up my existence at the moment). It was also strange to find ourselves walking along Oxford Street and seeing posters for the film, when we didn't know they were going to be there. Still, it did provide for some cheesy photo ops. 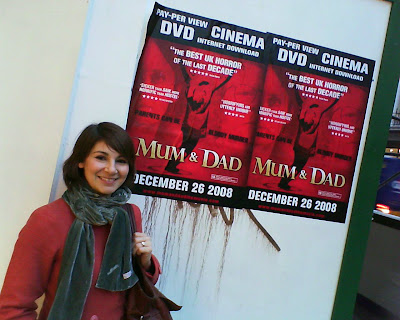 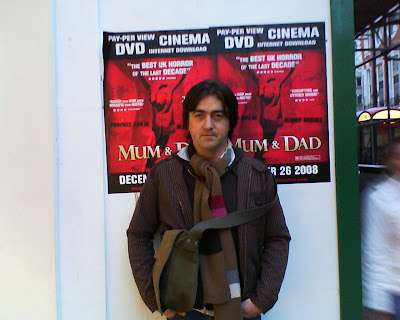 Now that we've had the UK release, the focus has moved on to the American one. A few weeks ago the film had it's US premiere at Slamdance in Utah. The festival is held at the same time as the Sundance festival, in the same place, Park City, a small ski resort town near Salt Lake City. Lisa and I both got the chance to go over for the screening - a long old hike, but really worth it for the experience.

On the flight on the way out there we met Damon Wise from Empire magazine, who was probably the first person to write about the film following the press screening at the Edinburgh Film Festival. He was heading over to cover Sundance, and gave us some tips on getting by in Park City.

We were staying at the ski resort, a couple of miles out from the main street. It was, as you would expect from a ski resort, very cold and snowy, but also beautiful. 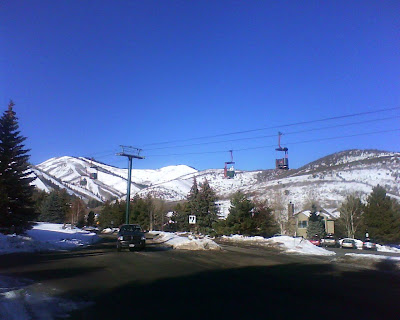 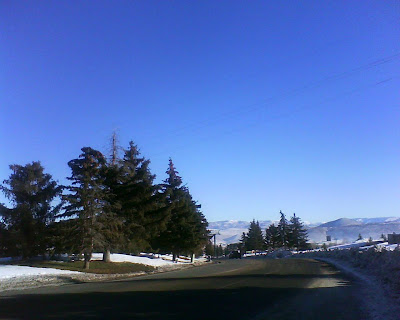 (Yeah, we were moaning about the freezing weather conditions and snow weeks before it was cool...). It was about -10 some nights up where we were staying, and although it didn't snow while we were there, it was very very cold. So cold, that they have actually built permanent outdoor fires to warm your toes on while you're out in the street. 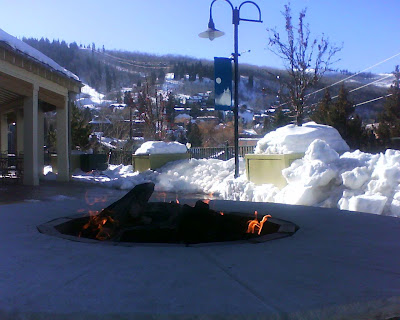 (And so cold, that it routinely created THE PERFECT MURDER WEAPON!) 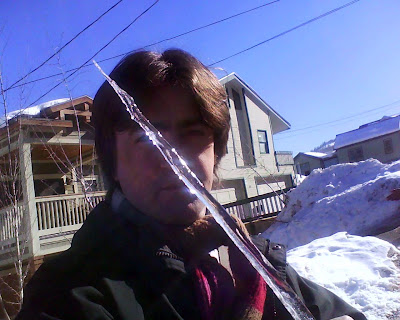 Slamdance takes place at the Treasure Mountain Inn, a hotel at the end of Main Street. 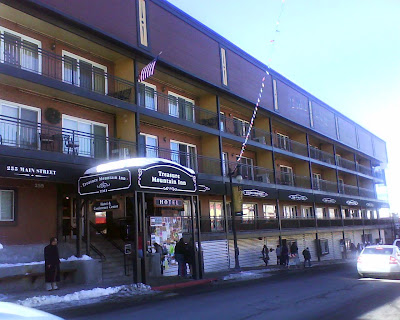 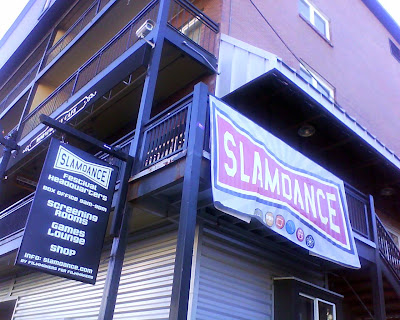 The set-up for screenings at the festival is admirably (and in keeping with the low-budget, independent ethos) ramshackle - there's no actual cinema, instead there's a video projector and screen put up in a couple of the conference rooms, with a few risers with chairs on them for the crowd. 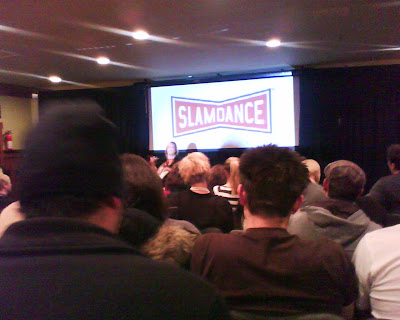 (This means that screenings can be a bit more active than normal - we watched a film with subtitles on which meant that you spent about 50 per cent of the time ducking and weaving your head around to see past the people in front.) It's a great festival though - with a real sense of identity, and a great team of people behind it.

As we had a friend out in Park City (Sol, who exec-ed 'Mum & Dad') who had a film showing at Sundance - Alexis dos Santos' Unmade Beds, screening at the lovely Egyptian Theatre 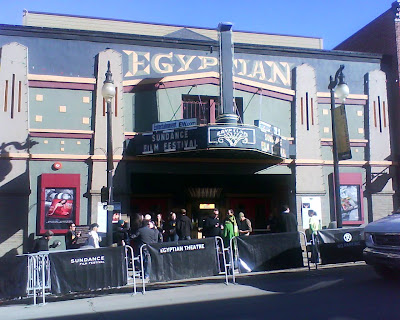 - we got a couple of passes to allow us to get into some of the Sundance buildings. (No screenings though - trying to get hold of tickets for anything was like trying to source hen's teeth and rocking horse poo combined). Sundance is a bit more spread out - some of it is housed on Main Street, while a lot of the screenings take place about a mile away, in and around a group of hotels, where most journos, critics and filmmakers hang out. 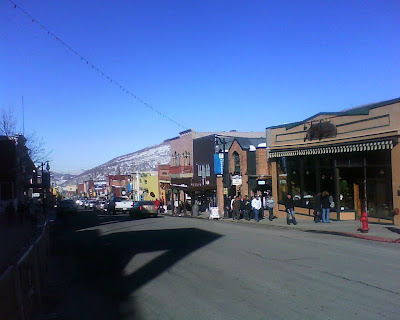 Main Street itself is where you tend to see the odd star though. I saw a third of Ashley Judd's head, caught a glimpse of Mariah Carey 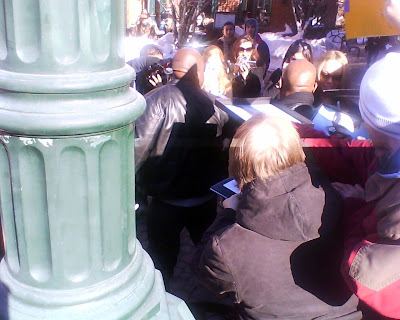 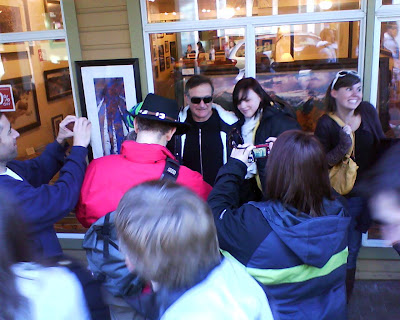 all of which was trumped by Lisa, who stood next to Robert Redford in a bar.

Our screening was late on the Sunday. We found out when we got to Park City that there are regulations about where you can put your posters and flyers (you can't just hand one to someone in the street, you have to do it as part of a conversation). There were a few boards specially designed for this purpose dotted along Main Street, which were inches thick by the end, as people stuck their own posters over others. 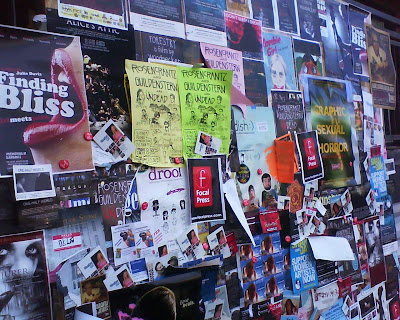 We had only brought a stack of postcards, some badges and some enormous quads, so our presence on the boards was either subtle 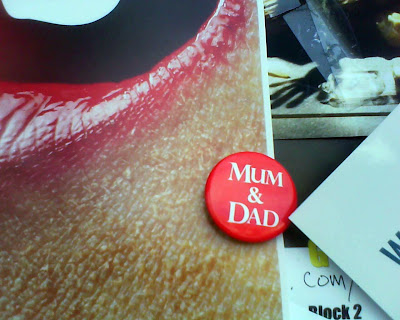 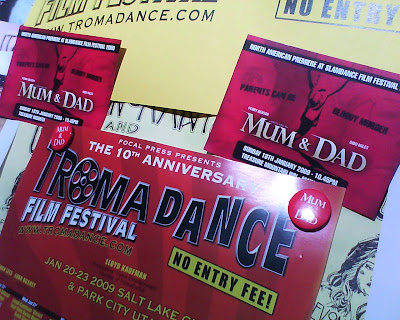 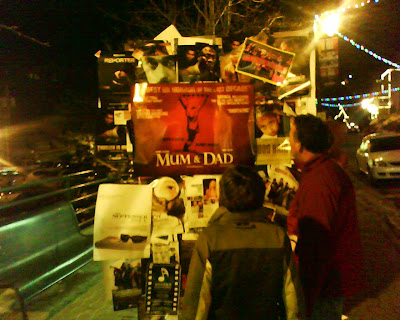 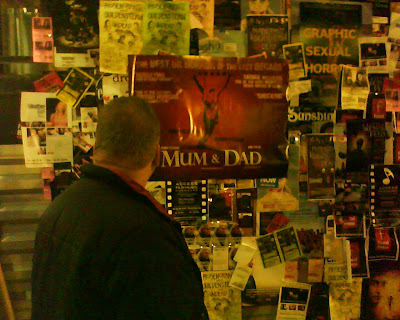 We had a good crowd for the screening and the film played well, with a great Q and A afterwards. (I didn't stay in for most of the screening, but this meant that I was allowed the opportunity to observe a slightly grumpy Ron Jeremy retrieve his suitcase from beneath the desk we were sitting at). I was worried that the film might be too British, but it seemed to travel fine and people got the humour. One woman asked me if I had been worried about screening the film - which includes a Christmas-themed quasi-crucifixion - in the highly religious State of Utah and I had to admit that I hadn't even thought about it. After living with the film for so long, some of the more contentious elements of the story now seem, weirdly, almost cosy.

It would have been great to have stayed longer, but our flight was booked for midnight the next day. I only got to see a few things - including a great documentary called Graphic Sexual Horror, about an extreme BDSM website called Insex and the man who created it (I met the directors, Anna and Barbara at one of the Slamdance events and had a great chat about the film - and about the prospect of whether it could ever get a release in the UK, due to the newly passed law banning the possession of "extreme pornography". They also gave me a T-shirt with the film's title on, which should cause a stir at the next parents' evening.) I also got the chance to meet up with MyAnna Buring, who I worked with on my short film 'Deliver Me' back at the end of 2006. She was out there with a whole gang of people from a film called City Rats, which she worked on and which was also showing at Slamdance. It was great to see her again - she's done quite a bit of horror now - including 'Doomsday', 'Freakdog' and 'Lesbian Vampire Killers' - although 'City Rats' is completely outside the genre and she's great in that too. One of the producers, Dean Fisher, was also someone we'd met through Microschool (albeit with a different project), and it was good to see him again, too and to meet the rest of the crew. (Although we didn't envy them their living quarters - about 5 of them were squeezed into an RV together with minimal heating. Makes my teeth chatter just thinking about it.)

On the way back (after nearly being killed by an overly chatty, mobile phone-using, sleep-deprived taxi driver, who pretty much fractured her arm just before setting off on the hour long journey to the airport along dark, mountainous icy roads) we missed probably the most significant day in recent American history. But then the flight was empty and I got to sleep (finally) across four whole seats, so, hey, I guess it all evens out in the end. 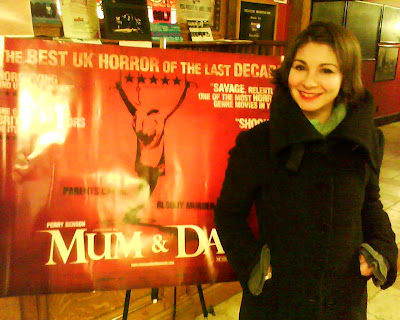 For Lisa's version of the whole of the above (and more) go here.. I'll try and be back sometime before the end of the year...
Posted by Steven Sheil at Monday, February 09, 2009