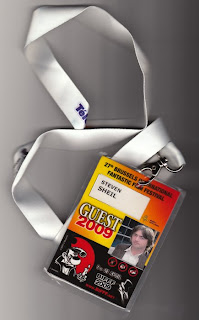 Last weekend, myself and Perry Benson were both invited out to the Brussels International Fantasy Film Festival (le BIFFF) to introduce 'Mum & Dad' and do a Q and A afterwards. It's the first time that I've been out to BIFFF, but I'd been told by a few people who have been that the crowd is very passionate and vocal. I don't know if I exactly took this to be a euphemism for 'they love to heckle', but it did make me a little bit apprehensive about the film's reception...

Being driven to the venue from the airport, I got told that it's a bit of a BIFFF tradition for the crowd to ask directors to sing a song to introduce the film. Having the vocal talents of a distressed cat with a throat wound, I was a bit nervous, but luckily Perry was along to save the day. He immediately started preparing an acapella version of one of his self-composed numbers 'Mad Mum' (v.fitting) and also got the festival organisers to write out for him an introduction in both French and Flemish. Man, that guy's good.

The venue itself was a place called 'Tour and Taxis' - an immense complex of buildings that used to house the customs office for Belgium. For the festival, one of the halls is converted into a kind of bar/cafe/shop/marketplace, while a neighbouring space is transformed into a massive 750 seat cinema.

'Mum & Dad' was screening at midnight (as seems to perpetually be the case...), and we had a good sized crowd for the show. Once up on stage, Perry read out his introductions, then launched into 'Mad Mum' with me on distracting backing vocals. I have no idea what on earth the audience made of it (and part of me wondered all the way through whether we hadn't just been made the butt of a particularly elaborate practical joke (a feeling which didn't quite leave me until I met another director later that evening who confirmed that he'd been through the same thing)), but we got a good round of applause. I only stayed in for parts of the film (it's got to that stage where I'm not sure I'll be able to actually sit through a whole screening of the film again for a good ten years) but from what I saw and heard, the rumours about the crowd were true. They are very vocal, almost holding a perpetual conversation with the action on screen, really unlike any other crowd I've seen it with. Not speaking either French or Flemish, I couldn't get a great idea of what was being said, but they seemed to laugh and groan and react at all the right places.

The only problem with screening at midnight is that you end up having to do the Q and A at two o'clock in the morning, which is what happened here. Factor in the additional elements of a) a free bar stocked with Belgian beer and b) Perry Benson, and you've got a recipe for a rather looser question and answer session than you might normally get. I think we both managed to hold it together to talk about the film lucidly enough, and we seemed to get a good response, with some interesting questions and comments (one guy asked why I was 'so fucking English and repressed' and I could only answer that I was born like that. Turns out he was another filmmaker, Alberto Sciamma, a Spanish director now living in London, who, I later found out, made the film Killer Tongue (which I haven't seen, but looks like it is a far cry from repressed...) who we ended up hanging out with for a lot of the weekend. After that we did some signings - including writing our names in the festival's own guestbook, a lovingly recreated Necronomicon - then went out and got horribly drunk. This wasn't the initial plan - I'd been told that Brussels 'wasn't really a late-night city' - but the combination of travel, long day, screening stress, Q and A adrenalin buzz and Troll beer led to wrongness. Unfortunately (for him), one of the people we were out with was director Lucky McKee, whose films I really like, especially the great May, a fact which I repeatedly told him in a drunken fug for about an hour. My only hope is that he was as drunk as I was and has even less memory of what was going on.

The next day, with ringing hangovers, Perry and I both did a couple of hours of press, including interviews for a couple of French websites and magazines, one of which is already up (the link's here for anyone who's got a good grasp of the language...), then went on to watch the football - Arsenal (Perry's team) versus Chelsea (my team) in the FA Cup. It was a good-natured contest - with Perry the loudest fan in the pub (full, seemingly, of Belgian Gooners), at least up until the Chelsea winner. From there, onto dinner and then back to the festival to see a little of the Ball of the Vampires (which reminded me a lot of my experiences on Goth Cruise, except with a lot more elaborate dressing up and some great make-up (they had an all-day make-up booth for both face-painting and SFX make-up - I saw one guy who looked really convincingly like his nose had exploded across his face. (If there's anyone reading this who had a terrible cocaine-swapped-for-gunpowder mishap at the festival, my apologies for the previous comment.)))

It's one of the great things about having made a film, getting to go to places like this and it really serves to remind you (especially when you're in the middle of head-scratching, knuckle-gnawing script revisions) why you're doing what you're doing. Everybody we met at the festival was really passionate about what they were doing, whether making films, programming them or just along to watch, which is a great atmosphere to be in. I only wished I'd had more of a chance to see some films, which always seems to be the problem when you're actually showing something...
Posted by Steven Sheil at Friday, April 24, 2009