'The Fiend' with a face. And a crash helmet.

Noodling around the BBC schedules late the other night, I came across a film called ‘The Fiend’. By virtue of the title – and the fact that the BBC regularly show half-remembered early Seventies horrors like “The Beast in the Cellar” (Beryl Reid harbours a dark secret in the basement) or 'I Don’t Want To Be Born' (Joan Collins as a stripper giving birth to a demon child (and the film which gives my sister-in-law hives at the very mention of the title)) at preposterous times of the morning – and because I half had it down as 'The Fiend Without A Face' (featuring a memorable insectoid brain monster...) 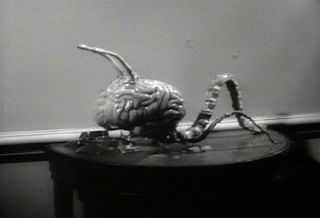 I figured that it might be worth a watch. When I checked the film out online, I found out that it is in fact from the Seventies - but also that the film was directed by Robert Hartford-Davies - who made the Peter Cushing face-stealing horror 'Corruption' - and written by Brian Comport - who also wrote the screenplay for 'Mumsy, Nanny, Sonny and Girlie', one of the influences for 'Mum & Dad' (it even, coincidentally features a character called Birdy...). All of which made it unmissable, for me at least.

'The Fiend' - released in the States as 'Beware My Brethren' - is a story about a young man, brought up in the bosom of a strict religious sect, who now goes out and murders young woman whom he considers of loose morals – (prostitutes, topless bathers, anyone who expresses any kind of ‘brazen’ sexuality, basically…). Living with his diabetic mother – his father having left years ago with another woman – in the house which also houses the chapel of ‘The Brethren’, the church to which both belong, Kenny Wemys (the killer) is a mess of repression and self-loathing and desire. Looking like a cross between Michael Caine and Harry H. Corbett, Kenny works nights as a security guard (and the film features a great,brawling punch-up in the opening ten minutes as Kenny, dressed in black, almost Nazi-style uniform and crash helmet, takes on two burly thieves in a junkyard) and days as a lifeguard at a swimming pool (loudly hectoring women who dare to loosen their bikini straps), both of which occupations he uses to line up his next victims. Kenny has a weird relationship with his Mum, Birdy – both of them at times seem to express a repressed incestuous desire for each other – although the only release (well, besides all the murdering) that Kenny gets is in going down into his cellar where he either sits in a room surrounded by his hanging bra collection (‘scalps’ from his victims) or at his workbench where, using three tape players, he makes his Pervert’s Own Mix Tapes – mashing-up recordings of his killings with tapes of The Brethrens’ American leader giving his inspirational speeches.

Scenes like these have a great feeling about them – really messed-up and sordid – and the killings are pretty well done too. There’s a real feeling of Seventies sexploitation about them - Hartford-Davies also made the girls-in-prison film ‘A Smashing Bird I Used To Know’ and the schoolgirl sex education movie ‘The Yellow Teddy Bears’ – with a grubbiness that you only really get from seeing middle-aged British character actors being given blow-jobs in knackered old cars on industrial estates by young prostitutes who gob the resultant mouthful out onto the gravel before being bludgeoned to death by truncheon-wielding nutjob God-botherers.

The film isn’t uniformly great – the opening sequence, cross-cutting between the young Kenny’s baptism in the chapel - orchestrated by severe minister Patrick Magee - and grown-up Kenny’s chase and drowning of a young woman in the canal, all soundtracked by church member (and original Grand Final Winner of Granada Television's Stars In Their Eyes (as well as the world's very best impersonator of Shirley Bassey)) Maxine Barrie’s psychedelic funk-tinged gospel song (the backing track of which appears, very unconvincingly, to be played by Kenny’s mum on the church organ) ‘Wash Me in His Blood’ – is terrific, but the film never really sustains the same intensity. Some subplots – mainly the police’s investigation into the killings – just peter out, and some sequences feel like they’ve been cut with a minimum of footage (reusing shots and jumping weirdly in time and perspective), but the film is always watchable and the characters – with the exception of the do-gooder nurse, her journalist sister and suave boyfriend (played by archetypal Seventies smoothie Ronald Allen, who presents a classic case of Husbanddickery throughout) – are interesting and engaging, with weird undercurrents and twisted perspectives (just how I like them.) If you get the chance, it's worth a watch - and would probably go great on a double bill with Pete Walker's 'House of Mortal Sin'. Ah, religion, cause of and solution to all of life's problems. No, wait, that's alcohol, isn't it...?
Posted by Steven Sheil at Monday, May 11, 2009