In the rush to talk about obscure early 70s exploitation-tinged psycho-sexual drama, I completely forgot to mention that my own late 00s exploitation tinged psycho-sexual concoction 'Mum & Dad' has now been released in the States. The film is available on DVD and on download (details here), including iTunes, and its even managed to cross the Atlantic with it's spelling intact (a version of the film with 'Mom' instead of 'Mum' was mooted at one point - which I wouldn't have minded, considering that the original 'Mom and Dad' was the film which gave me the title...)

There's a review of the film on the Fangoria site, and the film is also featured in a 3-page spread in the latest edition (the one with Sam Raimi's 'Drag Me To Hell' on the cover... 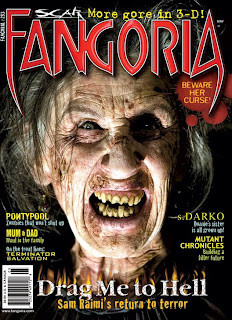 I've also done another interview, this time with Bloody Good Horror, where you can read me talk about video nasties, broken britain, and watching young women fight on grubby kitchen floors...
Posted by Steven Sheil at Thursday, May 14, 2009