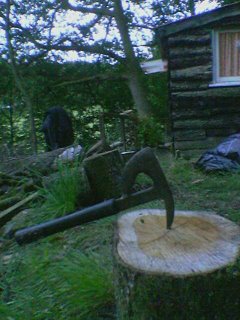 It's just gone 10pm and we've just got back from the first day of the shoot. I say 'we', but we're still waiting for John and Matt ot make it back after they stopped off at a pub on the way back - on the pretext of returning some kitchen foil - and haven't yet managed to navigate back to the house yet.

It was a good first day, but bloody long. I was up at about 6.30, immediately teased the curtains open to see what the sky was doing - and, amazingly, found that it was a beautiful blue sky and gloriously sunny morning.

While everybody else slept, I took the camera out into the forest and got some early-morning-sun-through-the-trees type stuff. It looked good - hope that I can find a place for it all in the film.

When the others were up, we packed the car and headed for the shack.

The morning was good, but a little slow - I managed to make one sequence of a man coming out of a door and greeting the new day necessitate about 14 shots - including one where John Ross had to climb a tree and do wierd things with his hands. I also made Matt take his shoes off and walk about on spiky branches for about 2 hours. They both seemed in farily good spirits though.

After that, we did some jib stuff. I should know by now that that always takes fucking ages, but it seems like I forget that every time, maybe just seduced by the fact it looks so good.

By the time we hit 3 o'clock, we hadn't done any of the interior stuff - which makes up much of the first 5 pages of script. I had to shotlist as we went along, which made my brain ache - but the shack, which at first seemed really grim, by now seemed quite cosy. I called Jeanie a couple of times to put back our pickup time - from 6.30 to 7.30 to 8.30...

We had to really bomb through the last couple of scenes - including the 'revealing the demon' sequence - and I couldn't get to see a monitor for much of it, so I'm trusting to John Ross that it all looks okay. By the time we finished at about 9, I couldn't even risk looking back over the script to see if we'd missed anything - so I guess if there are any story holes I'm just going to have to fix them in the edit. Put some voice-over on or something. Or maybe a caption 'And then, scared shitless, he ran outside...'

Keep trying to tell myself that I'm embracing the daft...
Posted by Steven Sheil at Thursday, August 03, 2006