beyond those gates flows a river of blood. Hurry, hurry... 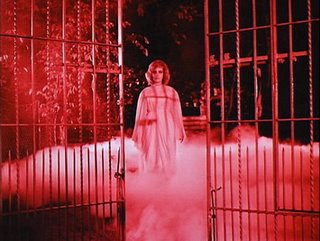 Saw the opening ten minutes of Lola Montes the other day, on a DVD I bought for a friend’s birthday (and which I immediately after seeing it wanted to have for myself, which just goes to show what a great film it is and what a fickle and selfish friend I am). It looked amazing – widescreen photography, astonishing lighting, a fantastically theatrical opening. I couldn’t believe I’d never seen it, or that no-one had ever said to me “Christ, you should really watch this film.”

It started me thinking about films that I would be passionate about people seeing (and subsequently made me think that maybe there’s an opportunity to write something that isn’t solely made up of moaning, whining, bitching, ranting and ill-thought out prejudices).

Of course, top of the list is Black Narcissus (which I’ve already raved about somewhere down below) – but branching out from that is any film by Powell and Pressburger – A Matter of Life and Death (fantastic opening ten minutes, amazing cinematography, mad ideas (a shot from behind an eyelid as it closes on an operating table, a naked child goatherd on an English coast – wha?) and a black and white Heaven); The Life and Death of Colonel Blimp (with the best duel scene ever), A Canterbury Tale (more mad stuff with a mystery man putting glue in girls’ hair), I Know Where I’m Going, The Red Shoes, Tales of Hoffman – honestly, for about 15 years everything they made was just about the most inventive and astonishing thing to be coming out of this country.

Then there’s something like Build My Gallows High (aka Out Of The Past), one of the greatest film noirs starring Robert Mitchum and featuring a complex flashback structure, great dialogue and a fittingly fatalistic ending…Although not as bleak as something like In A Lonely Place by Nicholas Ray, starring Humphrey Bogart and Gloria Grahame which is so bloody pessimistic it hurts….which is probably equalled in that respect by The Wages of Fear by Clouzot, which as well as being as tense and exciting a film as you’re ever likely to see (four desperate men transport highly unstable and hugely explosive nitro glycerine across a succession of the poorest quality roads that Mexico has to offer), is also about how far a man will go into hell for the sake of a bit of profit.

In another world, there’s Beyond The Valley Of The Dolls, which is just about one of the most flat-out enjoyable films you could ever watch. I know Russ Meyer gets pigeonholed as That Fella Who’s Obsessed With Big Tits (and quite rightly, really – but then he’s probably not any less fetishistic than any other filmmaker, it’s just that he’s more upfront about his. Yes, that is a terrible pun.), but what gets overlooked a lot of the time is how incredible a filmmaker he can be. He’s a great cinematographer, a really muscular editor, and he has a great eye (and ear) for knowingly absurd dialogue. The party scene in BTVOTD is fantastic and the closing ten minutes or so are just mad. And it’s got a brilliant soundtrack, featuring numerous power-pop classics by the film’s fictional band The Carrie Nations. You honestly can’t have a bad time anywhere near this film.

Also incredible, but in a completely different way, is Dario Argento’s Inferno. I didn’t get into Argento until about 6 or 7 years ago, when I saw a copy of Deep Red round a friend’s house, but since then, I’ve gone out and bought pretty much everything he’s done. It’s not as though every film he’s done has been great, and some of them, especially in the 90s can’t really be unreservedly recommended, but in any film he makes there is always something that you find yourself talking to somebody about the next day – a shot or a sequence or an idea that makes you stop in your tracks. Like the opening of Suspiria, where he uses music, soundtrack and image so brilliantly, it’s like Michael Powell’s idea of ‘the composed film’, or in Four Flies on Grey Velvet where you get a machine that can see the final image from an eyeball, or Two Evil Eyes where Harvey Keitel hilariously, madly, stupidly rigs up a way to avoid suspicion for murdering his girlfriend, featuring a photo of her face, and his arm attached to hers by a bit of string.
But it’s Inferno that is maybe the most extraordinary. The whole film is like a dream, from the opening sequence where a young woman finds a pool of water in the floor of a basement, drops her necklace in, then dives in after it, to find a submerged ballroom, to a horrible sequence in Central Park where a blind man is attacked while he tries to drown a cat, to the closing reveal of the witch behind the whole thing, the film has a feel like nothing else. Some people find Argento too much – they see the English dubbing, the often slightly wooden acting and the stylistic excesses and pigeonhole him as just another kitsch Italian horror hack, but Argento’s much more than that – at his best his films have a truly unique atmosphere that can be enormously disquieting.

There are even films that I would recommend on the basis of a scene, or a shot, or a performance, even if the films themselves aren’t great. There’s a horror film from the Philippines from the late Sixties called The Blood Drinkers which is a very low-budget vampire film, shot on 16mm, which is by no means a masterpiece but which has got some fantastic stuff in it – particularly one scene outside a crypt which is beautifully lit (a big light, hidden behind a tree, flares across the whole shot) and totally dreamlike – loads of the film, including this scene, is shot with intense colour filters, particularly blues and, as in this case, an intense deep red. A vampirised woman leads another newly vampirised woman out of the crypt and beckons her to leave the graveyard with the words “Beyond those gates flows a river of blood. Hurry. Hurry!” while a smoke machine works overtime, carpeting the ground with mist. It’s a great moment in a pretty good film, but it’s nothing you would have read about in anything other than the most comprehensive of guides to world horror (although I picked it up in HMV for about a fiver, so it’s not as though it’s the hardest thing in the world to track down). It’s just luck sometimes that you stumble across these things.

It’s great when you find something that you want to tell people about, and the more you watch, the more you start realising what you like in films and what you don’t like – I can see the filaments of connection between Argento and Michael Powell and even Michael Mann (whose Manhunter is another film I love), and the way in which those filaments connect to the way that I want to make films – I know that I’m consciously and subconsciously stealing from these filmmakers every time I start working on a film. And maybe that’s the thing that triggered this off – I saw the opening ten minutes of Lola Montes and got inspired because there was something in it that flicked a switch in my head – “now this is how films should be…”. It’s like we all have our own personal film canons in our heads, which as a whole might only work for us (and often it’s as much the films we don’t like that define this as the ones we do – I’ve had a lot of arguments with people over films like The Shawshank Redemption, which I really can’t be doing with, but which many people love), and which are defined by our own instincts and unspoken tastes and fetishes. (I’m a twin, and I find Cronenberg’s Dead Ringers incredibly affecting, and part of me really doesn’t want to explore why…). For every person who loves Kubrick, you’ll find someone who finds him cold and dull, for everyone who thinks that Kieslowski is the most accomplished European director of the past twenty years, you’ll find someone who finds him affected and pretentious (and that’ll be me).

Film can be incredibly revealing that way – your tastes reflect you, they encompass something of a worldview even, and when you come to make them you realise that the mess of influences and tastes and hidden preoccupations that you are drawing on are showing something of what’s inside you.

So Christ knows what this list says about me. A fetishistic fatalist with an eye for blood. Actually, that’s not too bad…
Posted by Steven Sheil at Tuesday, April 25, 2006