Why I am not a painter 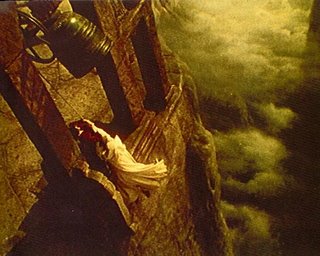 There’s a moment towards the end of Powell and Pressburger’s Black Narcissus, where Kathleen Byron, driven mad by jealousy, desire and rejection, steps out onto the roof of the Himalayan palace where her and her fellow nuns have been fighting a losing battle against the heady sensuality of the place, to confront Deborah Kerr as she rings the bell at the edge of the mountain. She looks like nothing and no-one else in British cinema – alien, possessed, a wraith. The image is one that I’ve loved since the first moment I saw it 10 years ago and probably the one single moment that has influenced me most in wanting to become a filmmaker.

I didn’t grow up wanting to be a director. I never made mini-dramas on my dad’s super8 or clunky old camcorder. I liked films, but then so did every other kid I knew. I watched what was on at the pictures – Jason and the Argonauts, Sinbad and Eye of the Tiger, Stars Wars, James Bond, Raiders of the Lost Ark, but I never had the idea that someone could make them. I had no concept that that would even have been possible. No-one I knew made films or wrote, or painted or anything like that. Most people I knew had families who worked at the airport.

The only thing I knew I liked doing was writing. I wrote comics with my brother, Kevin – typical stuff – Mission to Mars, Journey to Jupiter, sci-fi epics where all the characters had the same names as us and our friends. Later, I started to write stories for English classes and got good marks for them. I started to tell myself that I was a writer, and even started to think that that was something I’d like to be. But still had no idea that that was something that could actually happen.

As I got older, went to University, I still told myself that I was going to be a writer. The only problem was, I wasn’t writing anything. So I started to try and have a go – while at the same time studying English and American literature. I ended up being influenced by one thing after another – Hemingway, Faulkner, Raymond Chandleer, Burroughs. Out of all these, it was Chandler I really loved, and the first thing that I wrote that I thought – yeah, that’s all right – was a story called Case – a first person narrative, written in a hard-boiled Marlowe-style voice about a bloke (Paterson, named after William Carlos William’s poem) who worked nights in a supermarket, but saw himself as a Knight Errant Private Investigator. (First line of the stories “Bananas. Lots of them. Like nothing else, their stench stays with you…” ) It was part pastiche, part homage, but the idea was that someone could turn the everydayness of the life they led into a different kind of reality. I wrote another couple of Paterson stories before I left University and moved to Nottingham.

That’s when things really kicked in. I was skint, doing shit temp jobs (filing income tax forms in a giant warehouse by the train station, skinning chickens in an industrial estate works kitchen) or signing on. But I managed to hit a rhythm where I was always writing – short stories (Raymond Carver was the new inspiration) and poetry (WCWilliams was the main influence). I think over the period of a couple of years I probably wrote about 50 short stories and 100 poems. A couple of things got published locally and I even did a couple of nights of poetry readings, but to be honest I still had no idea about how I was ever going to be a writer.

Around this time, some friends of mine had started getting involved in film and video and through them I got involved too. It was another thing to try out. At first it was acting, but then I started writing some stuff too. Still, I never thought “I want to be a filmmaker”.

Around the time that I did Headstart, the Intermedia course, led by Roger Knott-Fayle, that gave me a grounding in the technical aspects of film and video production, I started watching films with more of a critical eye. I started trying to think about what I liked and why. And it was around this time that I saw Black Narcissus, saw Kathleen Byron and knew that something had hit me. Something had sunk in, dug it’s way into my head and the pit of my stomach.

It’s taken me the years since then to work on what it is I want to be as a filmmaker, and it’s still an ongoing process, but even today that moment still ignites a spark in me. I saw a review of Black Narcissus by Peter Bradshaw in the Guardian recently where he called the same scene “one of the scariest moments in British cinema history” and I felt like it was an acknowledgement of the power of that film.

So, why does it strike such a chord in me? Taken on paper, the whole story sounds daft, melodramatic – nuns on a mountain? a woman driven by desire for David Farrar (who comes in riding a donkey in a terrible pair of shorts)? a seething undercurrent of repressed sexual urges? But the film itself is extraordinary – and it’s about the intangible. It’s the air, the atmosphere of the place, the palace on the mountains (created in a British studio of painted backdrops) which affects the women so much – it’s something they feel, not something that they can touch or explain. (The Black Narcissus of the title is a perfume, perfectly intangible in cinematic terms). It’s this notion that something can affect you, the innermost part of you, and make you feel something that is at the centre of what the film is about – and it’s also at the centre of what films are and should be. Films should get into the corners of your minds and your guts and affect you, whether you like it or not. They should have that power.

And I think that’s the thing I’ve tried to take from Black Narcissus, and that moment in particular, that sense that you can create a mood, a tone, an atmosphere, something that lives in the film itself, that can transmit a feeling to the audience, that can burrow inside them and live there. It’s what I want my films to do and what I want films to do to me.
Posted by Steven Sheil at Tuesday, April 25, 2006