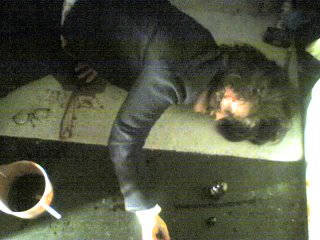 I’m in the process of making another film, a horror short called Through A Vulture Eye (TAVE for short), which we shot a couple of nights ago in our kitchen. It went smoothly (if slowly), finally wrapping at about half midnight. It’s a very short short, probably only about 2 and a half minutes, and there’s only a handful of shots, but a couple of them were very complicated jib and/or tracking shots, which always take much longer than you anticipate. There’s something really satisfying about them, though – when you’re having to track, jib up, tilt up, pull focus and frame all at the same time (with everybody having to take care of their own separate bits and rely on the others to do the same), it feels really difficult, but also like it’s a real test – and it’s all to make something look effortless and unmechanical.

TAVE is the third film in an unofficial ‘eye’ trilogy, along with my last two films ‘Autopsy’ and ‘Cry’. All three of them feature things going into, or being shown in eyes and each features an ECU of an eye. What this weird fetish says about me, I don’t really want to know. Maybe it’s just a desperate lack of imagination, and I’m just making the same film over and over. Obviously, there’s something about filming eyes that is intrisically tied into filmmkaing – it’s like reflecting the audience back at themselves, making them (consciously or unconsciously) aware of what the act of looking/watching/seeing actually means or implies. In this case, it’s about the fear of an image remaining imprinted, becoming reviewable (like a film).

The idea has a couple of reference points. The paranoid killer as first-person narrator comes from Poe’s ‘The Tell-Tale Heart’ (I’ve always liked this story – I remember hearing an audio version of it, played to me by a cousin in America when I was a kid – I also once wrote a version of the story from the heart’s point of view.) The notion of taking the image from an eye is a lift from Argento’s ‘Four Flies on Grey Velvet’ (which I bought recently on a pirate DVD from ebay. It’s a great film, but the print is one of the darkest things I’ve ever seen – there are entire scenes where you can hear action going on, but only see the barest glints of light moving about the frame. Ironic really, considering loads of his work is about what his protagonist thinks he or she has seen.)
There’s also a kind of EC comics feel about it, with one of those last frame horror reveals. Hopefully the whole thing comes together and blends into its own thing – I’ll know once I’ve put the edit together, which starts in earnest today.

I get asked quite a lot (usually by people who don’t like them) why I make horror films. I didn’t start out by making horrors – in fact it was only Autopsy which really started me off, and that was more of a psychological ghost story which happened to mutate at the end into a more traditional horror film scenario. Then, with Cry I really went for it, in terms of trying to create something that really looked and felt like a horror. And the thing is, out of all the films I’ve made, the horror ones are by far the most enjoyable to make. Maybe it’s because I’ve never really felt comfortable with realism – it always feels fake when you’re making a film, because it is – it’s based on creating an illusion, no matter whether you’re making a film set on a council estate about barefoot teenage mothers or whether you’re making something set on a spaceship, there’s an artifice about what you’re creating. I think with horror, because it often deals with unhuman or insane characters or entities, you get to fashion points of view (in terms of camera) which are often unnatural, allowing a degree of imagination in the style of what you’re telling which you might not employ in something more naturalistic. The audience going into a horror film knows that it is being told a story, something which happens in another world, parallel to our own, there’s no conceit that this is ‘real’ or ‘authentic’ (or if there is, it is formally acknowledged that it is – the opening blurb of ‘The following events are based on a true story’, a device used to amplify the frisson that the audience feels in entering this parallel world). When the audience knows that what they are watching is ‘a story’, they unconsciously allow the themes and images contained within what they are watching to seep in and affect them – this is why horror films often have a very visceral affect, they work in ways that are fundamental to how stories work, kind of like how fairy tales work on children – (not the bowdlerised ‘moral’ versions, but the original, folk-tale versions which are more complex in what they mean and how they work).

This isn’t to say that horror films are the only films which work in this way, or the only genre where you might employ the same techniques of telling, but they seem to be an arena where, because of the subject matter, you can be quite direct in talking about style and effect and how they tie into and spring from the subject. People know what horror films are supposed to do, so maybe there’s less discussion about ‘what do you want the audience to feel?’ People like to be scared and horrified, unsettled and shocked.