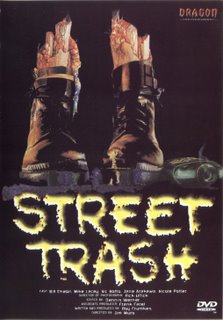 “Lower Manhattan. Life is cheap and gang warfare reigns supreme. Two brothers battle to break free from the clutches of the brutal Bronson and his vicious gang of street freaks. Together with a renegade cop, they set about cleaning up their territory…but they encounter a new enemy, a phoneminal new energy force that melts its victims in seconds. If you’ve never seen a melt movie then be prepared.”

That’s the back-of-the-box blurb for ‘Street Trash’, complete with spelling mistake (how hard is it to proof-read 70 words, for Christ’s sake?). Makes it sound like an action-packed horror-thriller, doesn’t it? Rather than the rambling, digressive horror-comedy it actually is…Not that I’m complaining, ‘Street Trash’ – on authentic big-boxed 1980s VHS for that extra frisson of low-budgetude – was a great watch.

Starting with a chase scene straight out of a silent movie (except with more’fucks’ and naked breasts), the film actually sets up the plot pretty quickly. A slob of a liquor store owner finds a 70-year-old crate of booze in a boarded up part of his cellar and decides to sell it cheap to the winos who seem to exclusively populate his shop. Within ten minutes, a couple of them are dead – melting away into puddles in a couple of fairly well-executed FX scenes - the first on a toilet in a derelict building, the second on a fire escape (dripping onto a yuppie who looks strangely like Tony Blair) At the same time, we’re introduced to the main characters, the two brothers who live in the junkyard, one a conscience-free drunk, the other a good-hearted innocent. 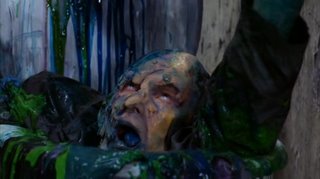 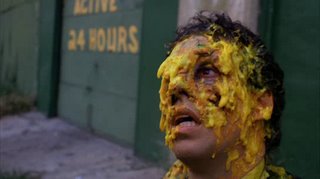 Then the film seems to forget about the whole ‘melting-booze’ thing and instead sets up a load of other characters. It’s like sTristram Shandy or something – the film keeps going off on tangents every time a new character is introduced, only finding it’s way back to the main narrative about ten minutes later, before veering off again. (Some reviews I’ve read have suggested that this was just a way to fill up the running-time, and some of it does feel like that, but it’s always watchable, and it does stay pretty much related to the junkyard and its denizens.)

In a way, it could almost be argued that the horror stuff is the stuff that’s tacked on and what the director really wanted to make was a film about a bunch of down-and-outs, all seemingly fucked-up by Vietnam. 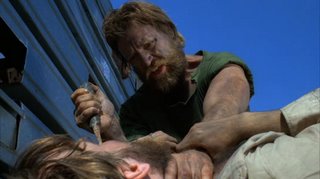 The lead baddie, Bronson, holds court at night, on his throne amongst the car parts, regaling his troops with tales of ‘war atrocities’, before falling asleep and dreaming of being attacked by Vietcong vampires, in a surprisingly (for the budget) effective and stylish imaginary sequence. 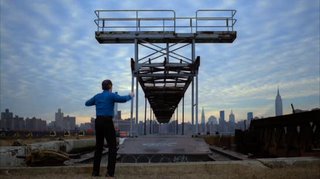 In fact, the film as a whole is pretty well shot, with some great steadicam stuff – the director Jim Muro is a DOP/Camera Op/Steadicam op and has gone on to do stuff on big Hollywood films – and handheld tracking, especially through the junkyard. There’s even a handheld vertical 360 turn during one of the melt sequences (which kick back in, along with the main plot, after about an hour). The design is great too – the film is full of grime, piss,puke, semen, blood and body ooze, every street is rubbish-strewn, every wall seems to have ‘fuck’ graffiti’ed on it and every hobo seems thick with dirt – you can almost smell them coming off the screen. 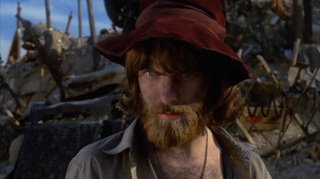 The script – ‘enthusiastically’ performed – is relentlessly foulmouthed (“Go fuck your Dog, Ed!””Very witty, pricklips!”), although also strewn with scenes where characters narrate what they’re doing and thinking for the sake of exposition.

It’s also got its fair share of Wrongness – the comedy (always accompanied by Benny Hill-style knockabout music) centres around scenes like an extremely fat boss trying to rape his secretary and apparently suffering a heart attack in the middle of it, or a man getting his cock cut off, then having to chase it as the others play piggy-in-the-middle with it (the scene ending, incidentally, with a shot of the cockless hobo gripping onto the back of a school bus full of screaming kids as he tries to get his appendage to the hospital in time. Pretty much a dictionary definition of Wrong, right there…) There’s also a terrible fight scene – unconvincing, badly choreographed, badly shot – which is only partly redeemed by the fact that the victor drags the loser head first into a urinal, then sticks his fingers down his throat and vomits on him.

But, it has got one of the best beheadings I’ve ever seen, containing a shot that made me laugh out loud (well, it was funny…). And the end titles contain credits for ‘Perverted Rottweiler’, ‘Exploding Bum’ and ‘Receptive Whore in Van’. (What some actors wouldn’t give for a credit like that…). The end credits also, weirdly, feature a song, in character, by one of the actors – a clichéd Mafia boss who is only really in about three scenes and doesn’t have anything to do with the main plot – which seems to recap his part of the film. Very strange. But not in a bad way.

‘Street Trash’ – at least in my VHS version - is only about 80-odd minutes long, but it does get a lot in, and it’s always at least entertaining. I mean, I haven’t even mentioned the death-by-windscreen, human femur knife or the necrophilia. 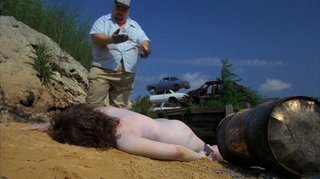 Or the impossibly hard-boiled, muscle t-shirted detective (Sample dialogue when looking at a police report of a body - Detective:“Who found her?”, Desk Sergeant: “It’s on the chart.” Detective: (shrugs) Hey, come on, I read like old people fuck.”). Of course, the sound mix is muddy as hell (not helped by the fact that some of the actors have only a passing acquaintance with intelligible diction), the ‘melt’ stuff isn’t exactly explained or resolved and there’s sometimes an uneasiness of tone between the comedy and the wrongness, but, if filthy booze-soaked bums melting into equally flithy toilets is your cup of tea (so to speak), then it’s definitely worth a look. Of course, that’s maybe an acquired taste.
Posted by Steven Sheil at Tuesday, February 06, 2007