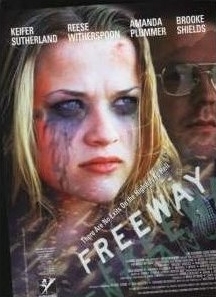 Coming home late the other night and searching aimlessly through the hinterland of Sky channels, I tripped across Zone Thriller (companion channel to Zone Horror, on 322) to find that they were showing Matthew Bright’s ‘Freeway’.

For a while a couple of years ago, Matthew Bright was going to be the next great cult filmmaker, following ‘Freeway’ and ‘Confessions of a Trick Baby’, two films based on fairy tales (Little Red Riding Hood and Hansel and Gretel respectively) – but then something happened. He made a film called ‘Tiptoes’, about a woman falling in love with her new husband’s dwarf brother (played by Gary Oldman on his knees) (no, I’m not kidding) and the Ted Bundy biopic ‘Bundy’ which was slated for its mixing of horrible rape and murder with throwaway comedy. Both of them were not seen by anyone. Since then, nothing. It was like all of a sudden everybody decided he was just too full of wrong.

The thing is, Bright had always been full of Wrong – both ‘Freeway’ and ‘Trick Baby’are twisted, fucked-up, perverted versions of archetypal myths, full of sex and violence. Like the bastard child of John Waters and Russ Meyer, Bright fills his films with vividly drawn characters and over-the-top dialogue. Like when the serial rapist-killer masquerading as a counsellor is quizzing Little Red Vanessa the hitchhiker about her childhood abuse:-

“Say it out loud Vanessa!”
“It felt like I’d been transformed into a human urinal…”

What in retrospect gives the film more of a frisson is the casting. Playing Vanessa, the trashy trailer park girl on the run to her grandmother’s house is (now Oscar-nominated) Reese Witherspoon, while the Big Bad Wolf ‘Bob Wolverton’ is played by America’s newest greatest hero (and extreme torture-junkie) Jack Bauer himself, Kiefer Sutherland.

Hearing Kiefer bark lines like “Get your fucking pants down, you fucking cunt!” to a teenage girl he’s planning to rape and murder is weird enough, but seeing him with a fucked-up jaw held together by sticks and wires after he’s been shot in the mouth by Witherspoon, his mouth drooling and distorted, speaking through a voicebox in his throat while he clings onto his prim wife (Brooke Shields, in another example of potentially stunt casting that actual helps the film) makes you realise how out of the mainstream Keifer used to be before ‘24’ put him back into the centre of the American consciousness.

Witherspoon is great in ‘Freeway’ – foul-mouthed, gun-toting, hard as nails, but still somehow sympathetic – probably because she consistently refuses to take any shit from anyone – parents, rapists, police, prison guards. She’s like the classic anti-social rebel from a Fifties B-movie. Except, instead of being a leather-clad biker, she’s a boobtube-wearing teenage girl. (With the follow-up (sometimes known as ‘Freeway 2’) “Confessions of a Trick Baby”, Bright goes even further, pulling off the enviable trick of making us feel sympathetic for a violent, murderous psychopath.)

The film also features supporting cast stalwart Dan Hedaya, Amanda Plummer (as Vanessa’s prostitute mum) and a young Brittany Murphy, but the film really belongs to Witherspoon, who showed real potential here,far beyond the ‘Legally Blonde’ ditziness (or the ‘Walking the Line’ earnestness) that she’s shown since. Honestly, it’d be great to hear her barking lines like “Fuck you chipmunk face!” to a deformed Keifer Sutherland again…