I dunno, maybe the scaffolding's overkill... 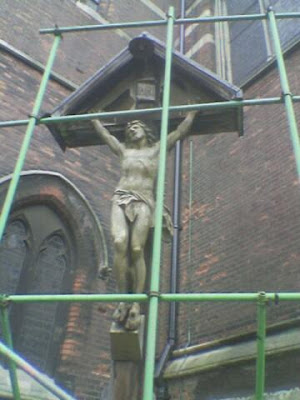 Back in Nottingham now, after a few days of Londoning. On Sunday I was doing some shooting for Jeanie's proposed next documentary, filming a very loud rock band in a venue in Camden. Luckily the place provided free earplugs, because I spent half the gig on the stage with my ear next to a stack of speakers, and otherwise I'd probably be entirely deaf by now. On Monday, I had a meeting with the distributors for 'Mum & Dad' (more on that when we make the official announcement...) and then on Tuesday, I was interviewed by FILM4, who are putting on a season of horror films on the channel at the same time that FrightFest is on. Tying in with their 'Generation Next' season, they were interviewing British directors of first-time features at the festival- myself, Johnny Kervorkian ('The Disappeared') and James Watkins ('Eden Lake'). The interviews were shot in a crypt in West London 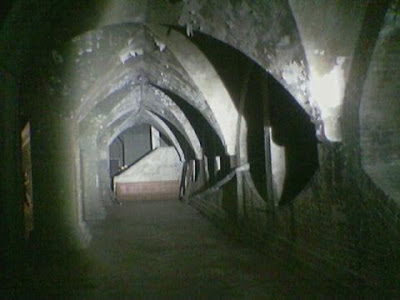 and I had to do some lurking about in the shadows (as befits us fearmongers, I suppose), although I did manage to resist the tempation to try on one of the many religious robes which were hanging on a rail in the room next door.

After the interview I had a meeting with our script editor for 'Empire of Flesh', which was great - I like the fact that we've got someone who's continually pushing me to make the script tighter and whose job is to expose the bits of the story that I've tried to fudge (because they're too difficult to do or because I've not been able to think of a solution to them yet). We had a good chat about the politics (or lack of them) in horror films, and about what makes an audience stay with a character - do they have to be 'likable' or just 'convincing'?

In the evening, Jeanie had her first screening of 'Goth Cruise', for cast and crew and invited guests (and Goths). It was great to see it on the big screen (apart from the couple of shots that I did that were slightly soft...) and it got a great reaction. Even though it was only last September, the whole thing now seems very far away, and I had to remind myself that I was actually there. The film is screening tonight in the States at Convergence, a big American Goth festival in Tampa, Florida. Jeanie went over and filmed some stuff at the festival last year, when it was held in Portland and it looks great - I hope it goes down well.

Back here yesterday, and we're getting on with Mayhem stuff. We're slowly firming up the programme and trying to get some special events sorted out for the weekend. We also met up with Rhys Davies, who is currently filming a zombie feature in Leicester called Zombie Undead, which is an ultra-low-budget production with great effects and make-up. It's a long process for Rhys because he's only got the resources to film a couple of days at a time (at most), so if you feel like helping him get to the end (and you've got some spare money hanging about which you don't mind sinking into a low-budget zombie film), visit their 'Help fund a feature film with PayPal' page here., and become a (rotting) part of zombie cinema's future.
Posted by Steven Sheil at Friday, August 08, 2008