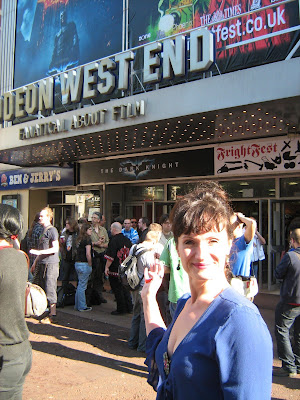 So, 'Mum & Dad' played at Frightfest 2008 - and went down great. We had a good-sized crowd (the Odeon West End is 800+ seats and we were pretty full for the screening), and we got a terrific response at the end. A lot of people stayed for the Q and A, with myself, Lisa, Perry, Dido and Ainsley, with some great questions and comments ("Yours is the sleaziest film I've seen at Frightfest - and I mean that as a compliment"), and a really appreciative round of applause for the actors. Revolver, who have picked up the film for distribution, organised a raffle for the audience, with tickets handed out beforehand and 'Mum' and 'Dad' handing out the prizes at the end. (Hey, maybe that's why so many people stayed for the Q and A...). The prizes were a set of kitchen knives ('Mum') and a toolbox ('Dad') which were both won by happy but probably slightly concerned audience members (I don't know if it's the best time at the moment to be walking through London with a set of knives...). Afterwards we signed a few programmes and spoke with a lot of the audience, with Perry being very popular, especially as he's also in Shane Meadows' 'Somers Town' at the moment. Someone kindly video'd a bit of it and posted it pretty much the same day 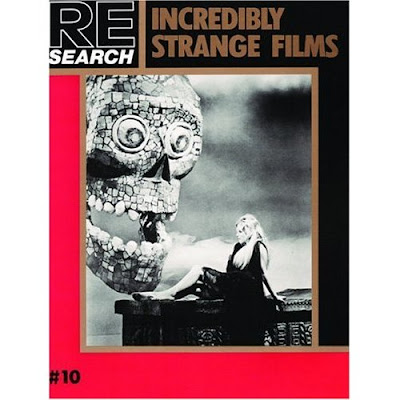 which features interviews with people like Russ Meyer, Herschell Gordon Lewis Larry Cohen and Doris Wishman and articles on genres like women in prison film, mondo films, exploitation films, beach party films, Santo films and sexploitation films. It's great.) was really inspirational. He told me that, at the time, he was really embarassed about it being in the book because he'd only really made one film ('Basket Case') - but in a way, that's what's great about it, and about a lot of the interviews in the book - they're with people who aren't fully 'in' the industry and therefore have a whole different approach to filmmaking.

I stayed in London for the next couple of days, watching as many films as I could, including 'Martyrs', 'Let The Right One In', 'Midnight Meat Train', 'The Chaser', 'Eden Lake', 'Fear(s) of the Dark', 'Autopsy' and 'The Broken', and trying to avoid dying of scurvy by only eating takeaway food purchased from a Spar just of Leicester Square. I wish I could have seen more, but I'm obviously much more of a lightweight than the regular Frightfest crowd. Maybe next year, once I've built up my stamina...
Posted by Steven Sheil at Sunday, August 31, 2008