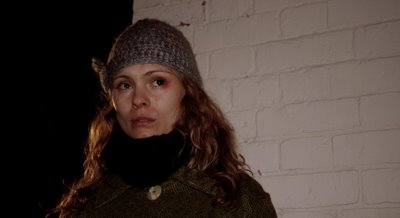 MyAnna Buring as Heather in 'Deliver Me'. Photo by Dan Hodgett.


It’s been a week since we delivered the edit of ‘Deliver Me’ and we’re still waiting for any official feedback – I did get a line in an email about it, but it’s hardly enough to go on for a fine cut. So, while that film floats about in Exec Viewing Limbo, I’ve had my head down finishing the first redraft of “Mum and Dad”. The script’s up to 90 pages now, with a handful of extra scenes added and some substantial revisions to existing sequences – although the basic structure and characters of the piece have remained the same. We had a really good chat with our script editor the last time we saw him, and he worked with me to bring out a lot of the relationships and back history of the family, a lot of which I’ve tried to get into this draft.

I finished the redraft on Tuesday and sent it off to ‘Mum and Dad”’s producer, Lisa Trnovski, who has been off on a commercial shoot for the past couple of weeks. We’re still waiting on contracts and money and stuff like that, so we can’t really get on with pre-production properly at the moment, although I’m hoping that’s all going to be resolved soon. I couldn’t take another situation like we had with ‘Deliver Me’ – waiting months and months for the whole thing to actually be confirmed.

It’s weird, going from project to project to project like this – I always moan about it doing my head in, but in some ways I think it helps. Although you have to switch from one set of things – stories, characters, plots – to another, you’re still in the same space creatively – that is to say, the creative muscles that you employ for each of them are the same, so in a way it makes it easier to get up to speed quicker.

Also, it’s good to get this kind of work done when you’re in a kind of groove with it*, because there’s always that fear at the back of your mind that there’ll be other times where you won’t be able to come up with a single new idea. Strike while the iron’s hot, as they say.**

We’re going to aim to have another horror night tomorrow. Cooke got a good amount of horror-themed presents for Christmas – Kolchak and Masters of Horror box sets – so we’ll probably start in on some of those. He’s trying to persuade me to show the rough cut of ‘Deliver Me’ as well, but I’m not sure – horror nights are supposed to be enjoyable and relaxing and watching unfinished versions of your own work, even in front of your friends, isn’t exactly in that category. I think he just wants to check out his lighting on the big screen…

*No, I don’t know why I’ve started speaking like some 70s hipster, either
**Or a middle-aged dad.
Posted by Steven Sheil at Friday, January 19, 2007

Labels: Deliver Me, Mum and Dad