I'm on a bit of a double-header at the moment - still finishing off 'Deliver Me' while going into pre-production on 'Mum and Dad'. Lisa came up today and we spent the morning being driven round by Dan from Em-media, who is helping us to try and sort out the main location for the film. It was just a preliminary scout round, really - we checked out certain areas in Nottingham - The Park, Arboretum, Mapperley Park, Lenton, Sherwood - where we might find a big empty house. We need somewhere that is usually described by estate agents as 'an investment opportunity' - i.e. somewhere that needs work doing. Ideally, somewhere that a property developer bought cheaply because it was in a state, then didn't get the chance to redevelop before the bottom fell out of the buy-to-let market and now it's like an albatross around their neck because they can't sell it, can't develop it and would be happy to let a film crew have it for a month for a nominal fee, just to make SOME money out of it....(Lisa suggested that we put a ad in the paper with words to that effect. Not sure if she was joking or not...). We found a couple of potentially interesting looking places - and even, purely by chance, got the chance to have a look round a place as the owner was there just as we drove past - it was mad - a former residential home in Mapperley with about 8 bedrooms and a layout like an Escher drawing. It was a really interesting place, but not ideal for us. Still, it was quite reassuring to think that there are at least potential places out there.

This afternoon we met up with Tina, who is going to work on the production side as well. Going through the list of what we need to do was both a little scary and quite reassuring - it's back to that thing of decision-making - the schedule requires us to have certain things in place at certain times, so we're forced to make decisions - for good or ill...But, like I've said before - once a decision's made, it's like a weight comes off, because you then don't have to (hopefully) make it again.

Time spent Not Knowing is the weight that settles most heavily on filmmakers, I think. For 'Deliver Me' we've been waiting to hear back from the execs over the past couple of weeks. We've had all our feedback now, but it felt like it took ages. (It sometimes feels like Exec Time is like dog years - for every week that passes in normal time, it's only an hour or so for them. Or something...) I know it's because they've got a lot of other things to do (mainly getting pissed on expense accounts at film festivals, I think...)(If any of my execs are reading this, I don't mean you) - but it's a really frustrating and anxious time because it means the film stops moving - and instead of you feeling like you're pushing it up a hill, it feels like you're just holding it in place, straining like a spindly-legged Sisyphus (yeah, that's right, highbrow Greek myth references now) or Wile E. Coyote (with an Acme Boulder-O-Matic 9000...). 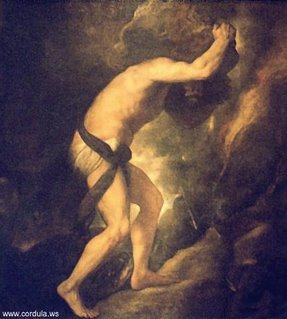 Anyway, the feedback on 'Deliver Me' was mostly good - there's not a massive amount of re-editing to do, and a lot of it can be helped with the sound mix and edit - so hopefully, once a few changes are made, we should get the okay to go forward. I really want it all finished now, just so I can have that bit of brain back...
Posted by Steven Sheil at Wednesday, January 31, 2007

Labels: Deliver Me, Mum and Dad