Had some time off over Christmas and New Year - but then have also had to get straight back into it because of 'Mum and Dad' bearing down hard on me like a enormous vulture of stress.

We actually started the edit before Christmas, our editor Barbara Zosel (who edited Jeanie's doc Teenland) came and did three days just after the shoot, and we picked up again on Tuesday this week. I haven't been in the edit suite all that much so far - I've let Barbara get on with putting together a rough edit. We've got a version now which is about 17 minutes long - it still needs a lot of work and some of the scenes - especially the healing scenes - aren't really working as well as I'd like, but it all seems to be going together okay. Cooke watched it the other day and said he was surprised at how bleak and miserable it was (in a good way).

Cooke was round the other night to help with the last outstanding shot of the film. This involved creating an internal shot featuring a penis and a vagina. I know, it's all wrong. I don't even know if it's going to fit into the film at all, but I wanted to try it out anyway.

Not knowing exactly how to go about it, me and Cooke drew some diagrams and did some research (hence the recent visit to a local sex shop). I also managed to download a startling bit of footage from a recent Channel Five documentary - The 21st Century Girl's Guide to Sex - which gave us a rough idea of what we were aiming for (if a little too explicit). Then I cobbled together some stuff from the house... 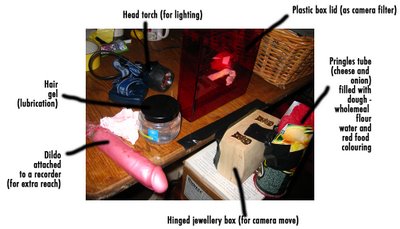 Still, it's done now. God knows if it'll ever see the light of day...

We're supposed to have a viewing of the rough cut on Monday, and then it'll be back in for the fine cut. In the meantime I've got to get back on with the redraft of 'Mum and Dad'. Maybe it's good to have set some wrongness in my brain in preparation...
Posted by Steven Sheil at Saturday, January 06, 2007

I doubt I will use the hand painted recorder which I got in my Christmas stocking last year ever again.