Feeling grubby can be a good thing...

The above still is taken from the opening sequence of Dario Argento’s ‘Terror at the Opera’, and it wasn’t until I watched it again (for the first time in about 3 years) on Saturday’s Horror Night that I remembered it. However, that clearly didn’t stop me from ripping it off for ‘Through A Vulture Eye” (Through a Raven’s Eye…?). Honestly, I’ve got no imagination…

We started with the Argento because Cooke had recently re-watched it to check out some lighting stuff for 'Deliver Me' and because none of the rest of us had watched it for a while. On the projector screen, in full 2.35:1 it looked great – it’s got some of the best sequences in all Argento, great photography and astounding shots – the best shot-through-the-eye scene ever, the phenomenal sweeping raven-cam shot in the opera house, the iconic pins-under-the-eyes scenes...

It's also got an ending which, even for hardened Argento fans like myself, is very hard to describe as anywhere near good. Cooke says the production was beset by problems and had to make up stuff as they were going along, but not sure even that excuses a line like "I love butterflies!".

Still, the film is both a joy and an inspiration. The opera house setting seems really fitting for Argento’s style – everything’s big and roomy and ornate – and it’s got an interesting role for Ian Charleson (looking strangely like Eighties Christopher Lambert )

as an Argento like film director. There’s brilliant use of steadicam all the way through – in fact the camera hardly ever stops moving – and a real sense of daring in the staging.

Next up, we had an episode of Kolchak called “Horror in the Heights”. Guest-starring a (slightly shaky) Phil Silvers, it’s a story about an Indian demon stalking a Jewish neighbourhood. It’s great genre TV – an interesting central idea, fluid execution and solid character work. It was especially good to see Simon Oakland as Kolchak’s constantly growling editor (if they were to list ingredients on the side of actors, his would read ‘99 percent irascible’.) 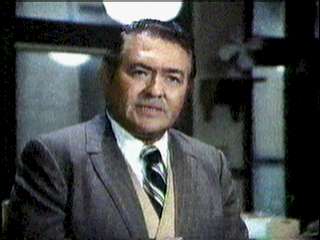 He also featured in Psycho – in the bit that nobody remembers – as a psychologist at the end giving an extremely lengthy explanation for Norman Bates’ mental state. Kills the film stone dead for about four minutes. Maybe it’s a ploy to make Norman’s grinning face in the end scene even more horrible.

Next was a film that Cooke’s been trying to get us to watch for ages, ‘Last House on Dead End Street’ – a notorious, ultra-low-budget grindhouse shocker from the 70s. It was about 40 shades of wrong – one of those films that makes you feel grubby while watching it. Which isn’t necessarily a criticism. It’s bloody, twisted, sometimes pretentious (in an art-school kind of way), with terrible dubbing (which somehow always adds to a film’s Wrongness Quotient) and the print was so degraded that in the dark bits it was like watching a fifth generation VHS through the bottom of a marmite jar. It was also one of those films where they seem to have decided that some of the key plot information is in fact superfluous, so that reading the DVD box afterwards is a big step in understanding what the hell’s been going on. 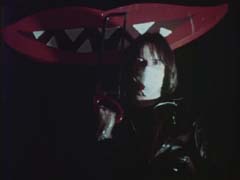 It has got some truly memorable sequences though – a suburban housewife in her underwear and blackface been whipped by a hunchback in front of a living room for the swinging neighbours (and her own child – who leads her in on a rope…) while her husband moans about how bored he is by it all – a gruesome surgery scene, the fakery of the effects only enhancing the horribleness – and a sleazy film producer forced to fellate a severed pigs’s trotter poking through the flies of a topless girl. 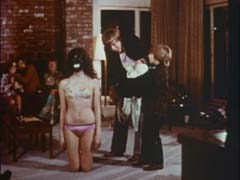 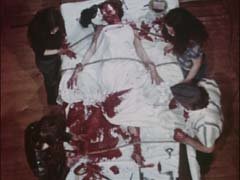 Again it’s kind of oddly inspirational – so low-budget, so non mainstream, so full of wrong but still around thirty years later – with commentaries and bonus features – it’s like there’s a twisted purity about it.

Last up, I got them all to watch Nigel Kneale’s ‘Baby’, which, while establishing Simon Mackorkindale firmly as the prime exponent of HusbandDickery, still managed to creep everyone out and end the evening on a bleak and depressing note. Three cheers for Seventies genre telly…
Posted by Steven Sheil at Tuesday, January 23, 2007