Dark Side and the moon

With a month to go before the release of my film 'Mum & Dad', the activity surrounding the film has kicked up a notch. After a short delay while we got all the artwork sorted, the official website for the film is now up and running, with all the details about how to see the film - in cinemas, on DVD, on VOD and on download (we discussed beaming it onto the insides of people's eyelids while they slept, but the technology's not quite there yet) as well as the new trailer, some stills, cast and crew biogs and updates on other screenings. There's also a new Facebook group and MySpace page, if you're that way inclined.

I've been doing a lot of interviews around the film, including one in the latest issue of The Dark Side magazine 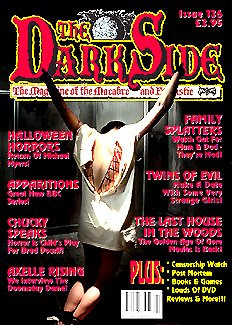 (which also features us - or rather a bloody, hanging Lena - on the cover). We've also kept the film going on the festival circuit, with another couple of screenings at the Northern Lights Film Festival in Newcastle and Gateshead next week. Lisa and I are also going to be on a panel about How to make a low-budget horror.

Ironically enough, one of the only festivals we didn't go to - only due to other commitments - was the Leeds International Film Festival where, we found out this week, we actually won an award (obviously our attendance at a festival must have a detrimental effect on the film's award prospects...). It was a real surprise - but greatly appreciated, especially as winning the award - a Silver Melies, named after George Melies, who made (amongst many others) the silent classic 'A Voyage to the Moon' 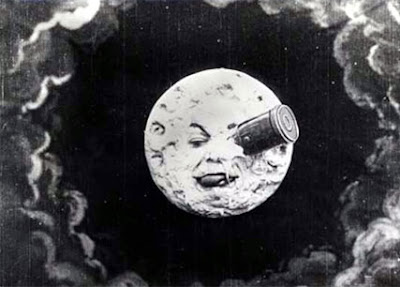 - means that we get entered for the Golden Melies, which is presented at Sitges next year, and is contested by the films which have been awarded the Silver Melies by each of the members of the European Fantastic Film Federation. If that means that there is even a slim chance of us getting a trophy of a grumpy moonface with a rocket sticking out of it, I'm there. The festival have posted up the Jury's comments on the programme, including their reasons for choosing 'Mum & Dad' here.

In other news - that's not all about me, me, me - Jeanie's film Goth Cruise is showing on IFC in the States tomorrow. You can see the American trailer for the film, complete with Trailer Voice Man, here. What with Jeanie screening on Thanksgiving and me on Boxing Day, we're seem to be staging a two-pronged assault on all national and international Bank Holidays. Watch it, Easter, you're next.
Posted by Steven Sheil at Wednesday, November 26, 2008

Ace Q&A after the film in Newcastle tonight.

This is Johnny Walker, the MA student by the way.

Thanks for agreeing to help me out, I really appreciate it.

Will be in touch; good luck with everything and have a good Christmas.

Oh, sorry mate, here's my email address if you've got any queries as regarding what I'm doing:

what if it's a statue of a man standing on a hose pipe while another man, a gardener looks into the nozzle to see why the water has suddenly stopped flowing?