And now it's November already. The past few weeks have gone by in a bit of a blur, what with Mayhem (which was on last weekend) and loads of stuff to prep for the release of 'Mum & Dad', and trying to work on a couple of new outlines, so AiU has suffered. I'll attempt a bit of a catch-up... 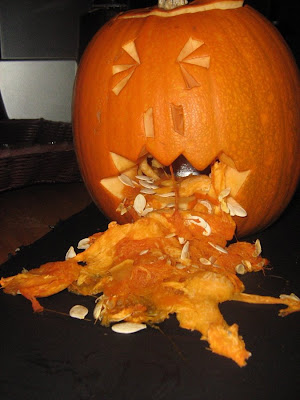 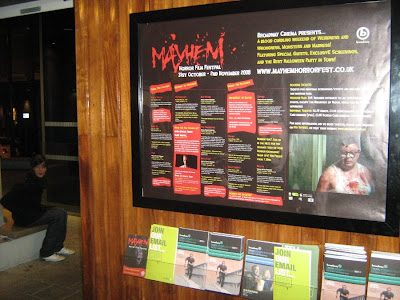 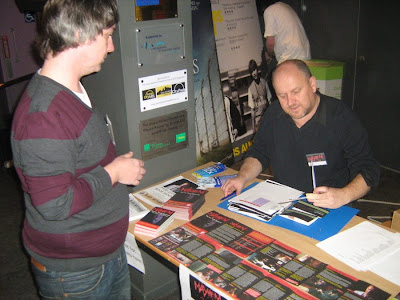 Mayhem 2008 went brilliantly well. We had a couple of sell-outs, a couple more near sell-outs and some great crowds throughout. This being the first year that we've run for a whole weekend as opposed to a single night, our workload increased exponentially, so that despite there being three of us, we still needed to constantly be in two places at once.

Highlights for me were the guests. On Friday, Mark Tonderai, director of 'Hush' (who I met at the Fantasy Filmfest in Germany recently) and his producer Zoe Stewart, who both came to our special preview screening of the film. It seemed to go down really well - even with an unscheduled intermission, when the fire alarm went off about ten minutes before the end of the film after the smoke machine in the bar got a bit out of control (and which Mark and Zoe were thankfully very understanding about). It was great to see Mark again and get the chance to catch up - 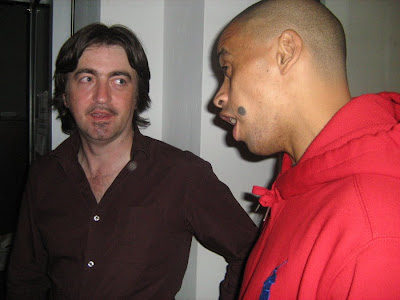 even if he was faced with my specially-grown-for-the-night Beard of Evil.

Also on Friday was the Halloween party at Broadway, run by No More Parachutes, which we as Mayhem piggyback onto each year. I don't know why, but this year everybody seemed to really go for it with the costumes, including these great zombie American footballers 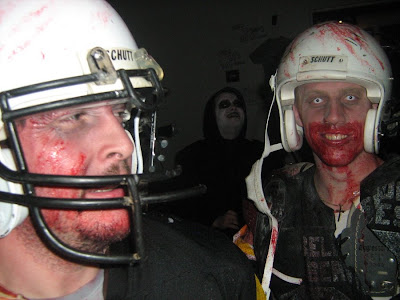 Jeanie and her friend Katie also did their bit 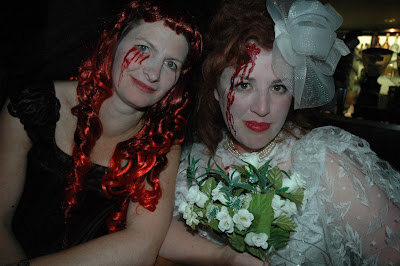 with Jeanie previewing the look she'll be wearing for our wedding next year.

Winner of first prize in the fancy dress costume was Scary Hellraiser Lady (otherwise known as Annie), seen here being presented with her prize by Chris Cooke with a Freddie Mercury tribute microphone pose 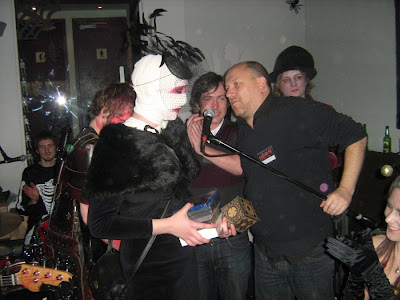 On Saturday our guest was Mark Gatiss. 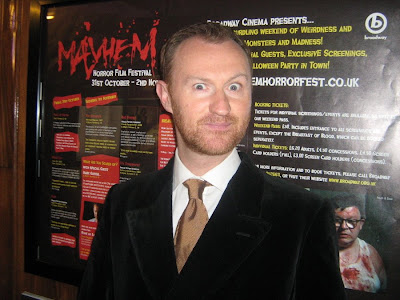 I interviewed Mark in front of an audience for our 'What Are You Scared Of?' spot, where we ask people to talk about the formative horror moments in their lives, the moments that have really frightened them. Mark was terrific - very entertaining and charming, and we showed a clutch of clips from 70s Doctor Who ('Terror of the Autons') to Hammer House of Horror, Carry On Screaming and the BBC Ghost Stories for Christmas. These last clips were especially relevant, as Mark is just finishing three of his own Christmas Ghost Stories - a horror anthology spread over three nights leading up to Christmas called 'Crooked House'. He brought us a short trailer to show and it looks great. I can't wait. Talking to Mark about Carry on Screaming, he told me that it was one of the formative experiences in the lives of all of the League of Gentlemen, having all watched it one Bonfire night in the 70s. When he said it, it brought back my own memory of the same night - I burnt my hand on a sparkler and was allowed to sit up and watch the film as some sort of comfort. Pain, shock, horror and comedy all melding together in my little brain... 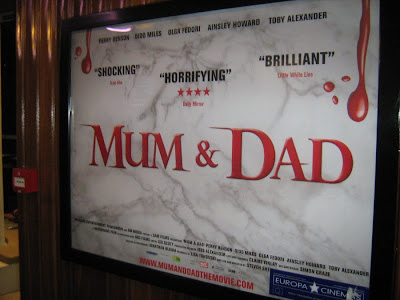 Also on Saturday, we had a screening of 'Mum & Dad' which was unexpectedly nerve-wracking for me. It was weird showing it at Broadway, especially as a load of people I knew were in the audience. It felt a bit like dropping your trousers at a christening. Afterwards I got some good feedback from some and some perturbed looks from others, which I've come to expect as par for the course with this film.

By Sunday, we were all feeling mental with tiredness, but still had a whole day of films to show, as well as runing events like Horror Wii tennis 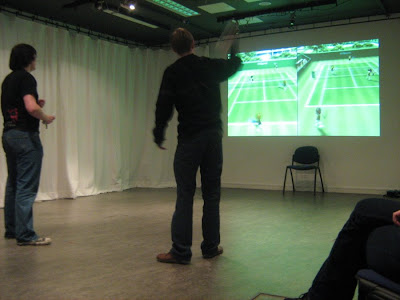 (basically Wii tennis on a big screen, except you get to play as a variety of horror characters - a werewolf, a vampire, Freddie, Jason, Sadako amongst others).

Our guests on Sunday, for a special screening of their new film 'Salvage' - another microbudget production, this time from the Digital Departures production scheme - were writer Colin O'Donell, director Lawrence Gough 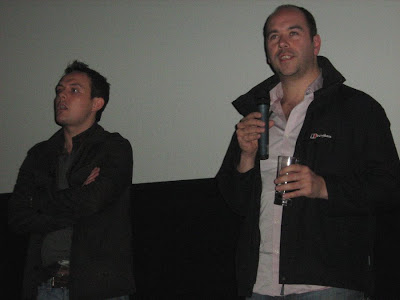 and actor Shaun Dooley, who I last met at FrightFest, where he was promoting 'Eden Lake'. 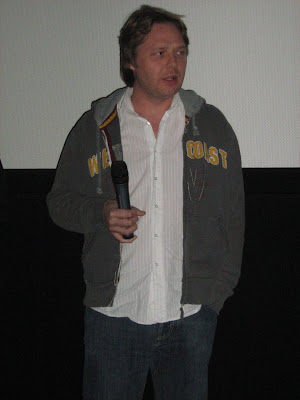 They were all really nervous as the film hasn't really been seen before, but it went down really well with our crowd, who gave them a great response at the end.

The last film of the festival was 'Martyrs', which left a lot of the audience looking pretty battered (it's a very intense and brutal film), although that might have been me projecting my own feelings onto them, feeling as I did, like my brain was about to pour out through my ears and collect in a puddle on the floor.

I didn't get much of a chance to recover from the weekend as I had an outline to finish for 'Empire of Flesh', plus some teaching to do. Then, on Wednesday, myself and Lisa went in to do the DVD commentary for 'Mum & Dad'. (Because the film is having this all-platform release on Boxing Day, it means that everything has to be done now - film trailer, DVD box, cinema poster...). It was strange sitting there talking away imagining that people are going to be listening to us (hopefully) in a couple of months. We pretty much went straight through in one take, with only a couple of moments where we paused for breath. It actually went really quickly - it felt like the minute we got into talking about one scene, we were straight on to another. Having done a load of Q and As and interviews over the last couple of months, it felt like a lot of elements in the film were really fresh in my mind, but I also did some homework by reading up on my blog from the time, which, even though it's only 18 months ago, felt a bit like leafing through a leather-bound journal you find next to a bricked-up corpse from the late 19th century.

After that, we had a meeting with our distributors Revolver, to discuss the poster and artwork for the cinema release and DVD, plus some more press stuff, screenings and the new trailer. During the meeting I got a fleeting icy jab of fear through my intestines as I realised that, yes, the film will be OUT on Boxing Day - but I quickly dismissed it by telling myself that Yes, That's Been The Whole Bloody Point Of The Past Two Years, You Idiot....
Posted by Steven Sheil at Friday, November 07, 2008