Deliver Me - Shoot Diary - Day One 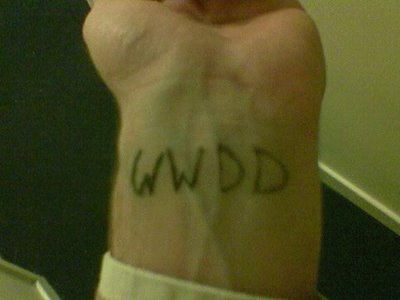 4.00 Just got to the location. Have decided to carry the motto ‘WWDD’ with me for the duration of the shoot, inked onto my wrist. It stands for ‘What Would Dario Do?’

4.40 Chris Cooke (DOP), John Ross (Grip and Additional Camera Op) and John Banner (Camera Asst.) are lighting the first scene, the actors are all toasty warm in Donna Bowyer’s new MiniWinnebago and I’ve just forgotten and then remembered a crucial bit of costume detail which I’m hoping won’t slow us down too much. We seem to have about 25 people around at the moment in this tiny flat which is by far the biggest crew for a film I’ve directed (and is in stark contrast to the 2-man crew we had for ‘Awake’). They all seem to know what they’re doing though, so I’m letting them get on with it. We’re aiming to get the first shot done by about six…

9.00 Just had ‘lunch’ – or ‘supper’ I guess – vegan bolognese (for Cooke’s benefit – although later we will have bacon cobs to satisfy the meat-eaters). We’re all on schedule. Got the sex scenes out of the way – the first I’ve ever had to direct (even if they both only involved a bloke on his own each time, pretening to have sex with Cooke’s camera). Apart from a weird moment after the first take of the first shot where the camera decided to stop working (heart-stopping…), everything seems to have gone well. The crew seem happy, the shots look great and apart from regularly glimpsing Mat – who’s doing the ‘behind the scenes’ documentary and keeps filming me when I’m doing things like demonstrating the appropriate ‘fucking rhythm’ on the bed, I’m feeling quite comfortable. Early days yet, though.

10.00 Planning for a very complicated track and jib shot, which requires expert timing from Cooke, Ross and Myanna, who’s playing Heather. Ross decides to improvise and borrow a mop handle to utilise as a vital bit of grip equipment. Maybe he should patent it – the JR MopHandle Extreme. 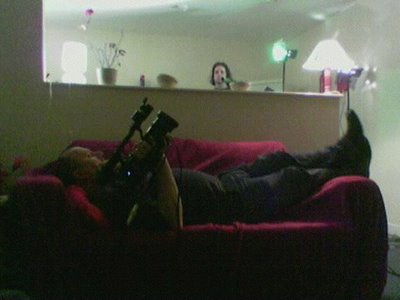 1.00am Onto the last shot. Cooke is on his back on the sofa filming a ceiling. Yes, a ceiling – how inventive, Sheil. It all got a bit faffy around midnight where we found a shot looking much uglier than we’d anticipated and had to run around trying to find a bit of set dressing to pretty it up a bit. That took up about 20 minutes, until Cooke decided to break every normal rule of filming and place a mirror in the middle of the shot. Still, unless this ceiling shot tuns into a drama, we’re going to wrap early tonight, and get some sleep.