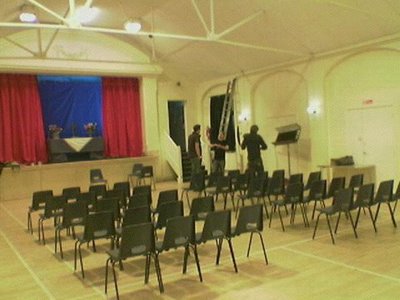 10.00 We've done the first scene. It's the only one with all three lead actors in it, so we cover it quite substantially. All three of them are great - and have been throughout the shoot. One of the directors on this year's DVShorts scheme, Deborah, comes along to have a look at what we're doing, and asks me how much rehearsal time we've had. I tell her we haven't - it would have been great, but in the end there just wasn't enough time to arrange it. She seems surprised - but I think if you cast well and you can get on with the actors, you've got to trust that they know what they're doing generally, and then anything on set is just a tweak. I think the key thing is communicating with the actors - luckily all of these three are really experienced, making my job easier. MyAnna is becoming slightly addicted to tear stick though.

11.00 Setting for a scene in the corridor and having a discussion with Cooke about lighting continuity. Shooting the whole film in reverse order (why we are doing this, I'm not entirely sure...) means that you end up having to do some strangely convoluted thinking - "So we need to set the lights to match with the scene which we are going to have established in the earlier scene which we shoot tomorrow." Eh?

12.30 Feels, bizarrely, both early and late at the same time. Early because we've done the scene we had scheduled, and even managed to bring forward one from tomorrow's schedule (making 1st AD Chris Pheasey very happy), and late because it's gone midnight - which yesterday would have meant we were into the last stretch, but tonight is only halfway there.

We're setting for the first of three very complicated jib and tracking shots. Knowing how long these things take to set up, rehearse and shoot, I'm hoping that five and a half hours is going to be enough. This is a key scene in the film, so I've got to make sure we get everything we need.

5.30 We've wrapped - and the lack of sleep is starting to really catch up with me. I'm feeling too tired for words - my eyes feel like they've been soaked in vinegar and dried with sandpaper. We (hopefully) got all we needed - although we were struggling for clean sound takes at the end because the birds started piping up outside with their dawn chorus. Fucking chripy bastards. Run through the storyboard and script one more time to make sure I haven't missed anything vital - but by now I'm not sure my brain would be able to tell anyway. Need sleep. Will work it out in the edit.
Posted by Steven Sheil at Monday, December 18, 2006