A graphic illustration of the stresses of being a filmmaker

Everyone keeps asking me if I'm feeling really stressed - what with it being the day before the shoot and all - and the truth is that the mood of fatalistic calm I was talking about the other day seems to still be prevalent. Although, thinking about it, maybe calm isn't the right word - my brain is still running at a hundred miles an hour, zigzaging off into different directions (What should Erin wear? How do I shoot the 'Paul fuck' scene? Have we got a crying man yet?) - it's just that everything seems like it's dealable with - we start shooting at four tomorrow and then that's it - we keep rolling until the film - for better or worse - is done. 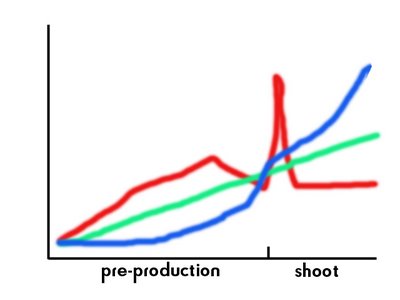 Here, red equals stress levels, which steadily climb throughout pre-production until the number of decisions made starts to outweigh the number of decisions yet to make, when it starts to fall again - until the first moment of the shoot when there's a spike of all-encompassing anxiety (usually accompanied by an urge to vomit), which quickly settles once the first shot is in the bag, then gradually diminishes as the shoot progresses.

Green represents adrenalin, which pretty much keeps climbing through the whole process - luckily enough, because if it didn't you'd be too knackered by the shoot to actually do the work. One by-product of this constant climbing adrenalin accompanied by fluctuating levels of stress, seems to be the possible (or even probable) formation of a number of ulcers in the stomach region.

Blue represents the icy dread that you've forgotten something of immense importance (probably the key thing that made you want to make the film in the first place). This climbs and climbs until it's too late to do anything about it. The thing that you've forgotten usually pops into your head about an hour after you've packed everything away and everybody's gone home. Then you have to spend the next few weeks convincing your editor that you actually planned to miss it out and it wasn't that important anyway, so that they don't think you're a bloody idiot.

Today, we checked through the camera kit, I finished off the shotlist (now typed up and ever-so-organised looking) and then I went home and moved all the furniture out of my spare room, because that's where we're shooting on Saturday night. Nothing like spending a couple of hours dusting and hoovering to get you in the mood for a shoot. Tonight, I'm meeting one of the actresses, Myanna Buring. Myanna was in, amongst other things, 'The Descent', which is probably the best British horror film I've seen in years. 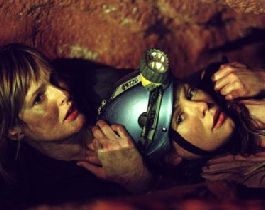 I haven't seen Myanna since the casting session, so we're going to talk over the film, in lieu of having a pre-shoot rehearsal. The actors all seem really keen on working on the film, and so far none of them have come up with any questions (I don't know why I was expecting them to have questions - maybe the script's clear enough...). We're going to be shooting the film pretty much in reverse order - all tomorrow's stuff happens at the end of the film and the stuff we shoot on the last night is the opening. I think this is the first time I've had to work this way around (Cry had to be shot chronologically according to the script because of the amount of room destruction that went on). My worry is that the possibilities for continuity fuck-ups exponentially increases the more out-of-sequence you film, but I guess I'll just have to keep my mind on it.

I got some notes today about the rewrite for 'Mum and Dad' and realised (again) that I'm pretty much going to have to go straight onto that after I've done this. In a way though, despite the unrelenting head-fuck of it all, it's good to do the two back-to-back - at least it means that I'll be in some way prepared for all the things I have to do for the feature, having just done them for the short. Anyway, that's weeks away - let's get the short out of the way first...
Posted by Steven Sheil at Thursday, December 14, 2006

hi steve! good luck with it all. i know the likelihood of you reading your blog again before the end of the shoot is slim, but give me a shout if you need any help.