11.30 Managed to get a good sleep last night - apart from waking up at half seven, which is kind of the default time that Betsy would normally be waking me - and only spent a couple of hours being mind-prodded by stuff I've got to remember to do today.

2.00 Just got back from the hotel where the actors are staying after doing a costume fitting/check. Sam Loggin, who's playing Erin and Glenn Doherty who's playing Michael were both there and seem excited about starting. Glenn said that he'd read the blog and noted my comment about actors being 'flesh puppets' - but I don't think he was really offended...

Made some decisions about costume and came back just in time to give the place a quick hoover. In a moment of weakness I agreed to use our house for tonight's shoot. This is, obviously, quite stupid, but I've said I'll do it now so there's no backing out. I guess there are some advantages - I don't have to travel to set, I can go to bed straight after we finish - but they might end up being outweighed by the constant anxiety that the crew are wrecking my house. The funny thing about shooting on location is that it only takes about 5 minutes for you to start thinking about the place as 'a set' rather than as somewhere where people live. Maybe my constant nervy presence will stop them doing any major damage.

Another advantage of shooting in the house is that, if I get tired, I can get them to wire up the monitor for me, get my dressing-gown and do it all from bed. I can just borrow a walkie-talkie - "Tell the male flesh-puppet to talk a little faster for me, would you..." I'll be just like this guy. 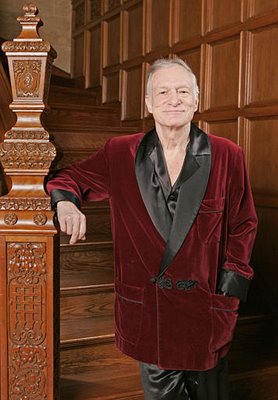 
18.55 Still shooting the car stuff - just having a break while they rig the bonnet shot. All going well - done all the interior car driving stuff - which is such a pain in the arse for everyone - can't see the camera, can't get a monitor, Grant (sound) is crammed into the boot like a mafia corpse - that I don't think I'll do it again. Think we got some good takes - just need to hope that speed bumps, car vibration and engine noise are all surmountable in the cut. But then, what are editors for?

03.59 Just wrapped. Quite a niggly, frustrating and scratchy night all in all. The car stuff took forfuckingever to finish - we had problems with clamps not clamping and batteries running out at highly inoportune moments, which meant that we got to lunch about an hour behind. Then we had to come in and do the 'bedboy' scene, with Laurie in full make-up. For some reason we had about 10 minutes of not understanding how the lighting was supposed to work, with me and Cooke getting snitty with each other before we came downstairs, talked it through and realised what the hell we were doing. We managed to get everything we needed- both Sam and Laurie were great under duress - or in Laurie's case, under about three inches of make-up - and it was only at the end that things seemed to get niggly again, when one of the lighting kits we'd hired decided to start not working - or working intermittently, which isn't a good thing for when you're trying to suggest a constant light source.

Still, considering we had to deal with cars, prosthetics, electronic glowing hands and contact lenses coming in and out, I think we did well to finish more or less (10 minutes early) on time. Now I really need all these people to get out of my house so I can go to bed... 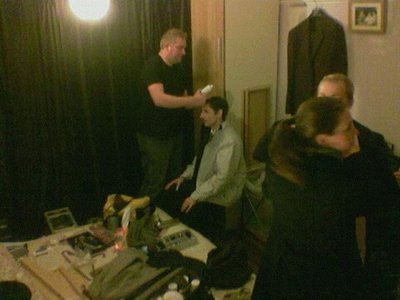 Oh sheil, you better be looking after the house!

Sounds like it's all going well and probably less stressfull than a weekend at my parents combined with Cinderella, Janette Krankie, all manner of sound activated, dancing snowmen etc and Betsy being indulged beyond her wildest dreams. I feel like Betsy's bitch!!!

Oh sheil, you better be looking after the house!

Sounds like it's all going well and probably less stressfull than a weekend at my parents combined with Cinderella, Janette Krankie, all manner of sound activated, dancing snowmen etc and Betsy being indulged beyond her wildest dreams. I feel like Betsy's bitch!!!