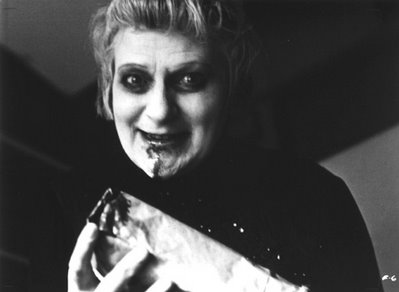 We’re into the last few days of pre-production before the shoot starts on Friday and the stress of last week seems to have begun a strange transformation (at least for my part) into a kind of fatalistic calm. Essentially, the closer we get to the shoot, the less possibilities there are, either because a)I’ve done all the work I should have done and made an informed and hopefully wise decision or b)I’ve had to say yes or no to things I’m not sure about because there isn’t enough time left for me to fuck about anymore.

Either way, making decisions is good, because once made they generally don’t have to be made again, so the millions of possibilities that presented themselves at the start of the shoot – encompassing casting, locations, crewing, art-design and storyboarding – have now shrunk down to mere thousands. Whatever decisions we’ve made prior to the shoot will force an outcome during the shoot and the edit, so that’s when we’ll find out if we’ve fucked up or not. In a way, this might be the most exciting bit – when you’ve got all the elements but they’re not assembled yet – because the film starts to exist in your head as a mixture of those possibilities, and the reality of your decisions hasn’t yet had a chance to force itself onto the screen.

When I was writing about making an ‘unperfect’ film last time around, I think what I was trying to get at was this - because I think that films, if they are writer/director led, often present a worldview which is distinctive to the filmmaker, the decisions you make are often informed by subconscious prejudices and fetishes and so the best you can hope for is to make a film which is revealing - not only to an audience but to yourself – an element of what you think about the world – or maybe, more distinctly, what kind of stories you translate the world into. And as such, it's never going to be perfect - because it never could be - but it might be well-translated enough to make the audience feel or think something that you have thought or felt.

Chris thinks ‘Deliver Me’ is a Seventies British horror film – not in a campy, take-the-piss kind of way, but in a way that it evokes a feeling from that era. He might be right – I’ve seen a lot of films from that time and I think it was probably the last moment when British horror had a really distinctive feel. But I hope the film doesn’t feel like a ‘homage’ or some kind of fanboy wank – I want the story to work on its own merits. Maybe he’s just saying that because he somehow pictured the lead character (who is actually now only in her late twenties…) as being played by the incomparable Sheila Keith from Pete Walker’s Frightmare) 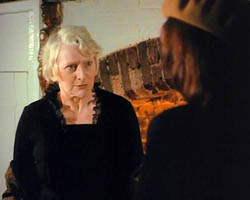 I guess in my head it’s always going to be ‘a story’ rather than a slice of ‘real life’, so the script has a stylised feel which I’m hoping to carry through to the shoot. It’ll be interesting to get the actors’ take on it and see how it works. This’ll be the first time for ages I’ve actually directed something that has more than one character in it (or at least the first time for ages where the other characters haven’t been a demon, a corpse or a niggly little tree demon…) so Christ knows how all that’s going to turn out. Ah well, they’re professionals, I guess they do this kind of thing all the time…
Posted by Steven Sheil at Tuesday, December 12, 2006